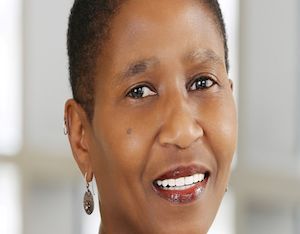 Akron’s own LeBron James might be the NBA’s most prolific player, but he is not their highest paid.

Truthfully, professional athletes, who generate millions in revenue and helped the NBA to secure a $24 billion dollar television deal, receive less-than-half of the league’s revenue. Owners up in the box seats get the majority of the checks.

Michele Roberts, the first woman to hold the chief position with the National Basketball Players Association, has only been on the job for a few months now but is already calling for drastic changes. “Why don’t we have the owners play half the games?” Roberts asked, speaking from her Harlem office to ESPN: The Magazine. “There would be no money if not for the players.”

“Thirty more owners can come in, and nothing will change. There. Would. Be. No. Money,” she added, pausing for emphasis. “These guys [the players] go? The game will change. So let’s stop pretending.” With the new TV deal on the eve of being distributed, Roberts is preparing for the hoopla which will take place in 2017 when a work stoppage is said to be put in play. NBA Commissioner Adam Silver already got the ball rolling on behalf of the owners, but it’s Roberts job to make sure the players are ready to fight as well.

In addition to making a legitimate effort to get rid of the NBA salary cap within the next few years, Roberts also said she’d like to seriously consider lessening the NBA season. “Every time a player gets hurt, I think, my God, they really are pushing their bodies,” she said. “And back-to-backs, those are the ones I really find disturbing… So, the answer, of course, is that everybody wants a shorter season.” The issue stems in the financial incentives to take a break and/or play the full 82-game season.

With other issues such as a rookie pay scale and an age limit on college and high school prospects, Roberts believes she has the answers to the symptoms that ail today’s NBA league. On the opposite end of the table, the NBA argues that the salary cap is necessary, as the league doesn’t compete with each other – rather it competes with other forms of entertainment. As part of the same organization, the NBA believes that it has a right to raise overall revenue.

Roberts, a Harvard Law graduate and a mentee of attorney Charles Ogletree, might not win the argument overnight, but she will change the narrative.