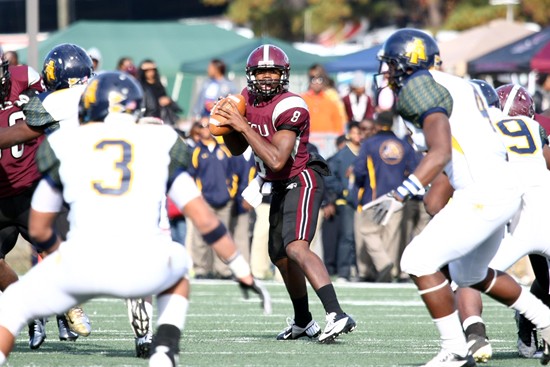 The MEAC announced its television schedule for 2013 last Friday, and while several games could be compelling, there is one noticeable omission: the Nov. 23 matchup between North Carolina Central and North Carolina A&T.

It’s not that the schedule doesn’t include some good games. Howard and NC A&T both experienced a resurgence in 2012, and will be hoping to continue that progression when they meet on Sept. 26. Defending MEAC champion Bethune-Cookman appears twice on the list, first in Durham, NC against North Carolina Central and again on Nov. 23 against in-state rival Bethune-Cookman.

Despite those matchups, you have to feel like both the MEAC and ESPN are missing out by not having that A&T-NCCU matchup on cable. I attended the game for the first time last season, and I came away feeling like this was the most intense rivalry in the MEAC, and maybe in all of HBCU sports at the moment.

This game has everything you could want in a rivalry. For one, both schools are in the same state and same conference. Of course that’s true with the Bethune-Cookman/FAMU matchup, as well as the Hampton/Norfolk State “Battle of The Bay” game as well. The difference is both NCCU and A&T are in-state, public schools, which makes it even more intense. While both schools, particulary A&T, have a sizeable percentage of out-of-state students, for the most part they are competing for the same students, and the same student-athletes.

It’s very common to have athletes from the same high school team or even the same family playing against each other in this game. That familarity breeds a competitive nature in not only the athletes, but the fans. HBCU fans have earned a reputation for lukewarmness over the years, but I saw none of that in last season’s finale at O’Kelly-Riddick Stadium. The atmosphere was electric: the stadium was packed, the fans were into it and the players left all they had on the field in what became a 22-16 overtime victory for A&T.