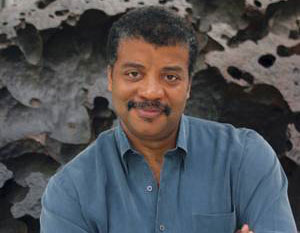 Neil deGrasse Tyson (@@NeilTyson), astrophysicist and director of the Hayden Planetarium at the American Museum of Natural History in New York City, is debuting a new TV show, StarTalk, on the National Geographic Channel on Monday, April 20.

The show, though, isn’t technically new, according to the Los Angeles Times, having been a podcast and occasionally been broadcast online since its debut in 2009. But tonight marks the first-ever cable network run of the science-meets-late-night-themed television mash-up.

So, how will that format work? Well, on the program, Tyson will bring in his celebrity guests—including his first, Star Trek alum George Takei — to chat about topics that have a scientific bent, according to Forbes. That could be anything from the human propensity to discriminate to automatic doors to, appropriately enough, the Star Trek warp drive, the Los Angeles Times said. But rather than a college-style lecture on the principles that define these serious subjects, the discussion will be infused with comedy, with Tyson saying the program is “trying to bring science to the public, bring the universe down to earth.â€

The concept of making science accessible could be a winner and a sustainable niche, given the popularity of the shows such as The Big Bang Theory. And Tyson, easily one of the most recognized scientists working today, could be America’s favorite, given that just last year he hosted the successful documentary series Cosmos: A Spacetime Odyssey.

StarTalk‘s premieres at 11 p.m. EST and will go up against other late-night fare, such as The Tonight Show Starring Jimmy Fallon, Jimmy Kimmel Live and Late Show with David Letterman, along with the ever-popular The Daily Show. But the #BlackTwitter favorite already has some momentum on his side: his show has been renewed for a second season ahead of its first season premiere, Variety reports.

FacebookTwitterYoutube
← Medical Marijuana Stocks: The 411 on Investing in ‘420’ ← How to Deliver an Effective Pitch to Get Investors
×