Nelson Mandela's Grandsons Bring 'The Power of Words' to Tribeca 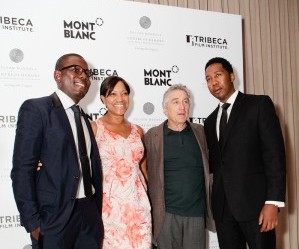 Every April evening in the few minutes before midnight, the words of Nelson Mandela take over the billboards in Times Square. The Power of Words, a short video that displays select quotes from Mandela’s speeches, fills up select screens from 11:57 p.m. to midnight. The Power of Words is a preview of a project of the same name that will culminate in five short narrative films that celebrate and interpret the words of the South African leader. The initiative is a collaboration with the Nelson Mandela Foundation, the Tribeca Film Institute, the Times Square Alliance, and Montblanc.

At the forefront of the project are two of Mandela’s grandsons, Kweku, 28, and Ndaba, 30, who are co-founders of African Rising Foundation. The cousins hosted a special screening of the film on April 19, with Robert De Niro, co-founder of the Tribeca Film Institute, in attendance.

BlackEnterprise.com spoke with Kweku and Ndaba about the The Power of Words, their other work with the Nelson Mandela Foundation, and their internationally known last name.

Black Enterprise: Can you tell us about The Power of Words, in your own words?

Kweku Mandela: The Power of Words is basically a project and collaboration between the Tribeca Film Institute, the Nelson Mandela Foundation, and the Times Square Alliance, and it’s powered by Montblanc. The really unique thing about it is that we’re taking five high-profile, world-renowned directors and teaming them up with five young aspiring filmmakers from the Tribeca Film Institute Fellowship Program. Those ten filmmakers will go out to five Boys & Girls Clubs around the country, and they’ll each be given one quote from my grandfather, and they’re going to have to interpret that quote into a modern-day short film that deals with stuff we deal with on a day-to-day.

BE: How did the partnership with the Tribeca Film Institute come about?

KM: I became involved with Tribeca in 2011 through one of its directors, TamirÂ Muhammad. We had been talking about doing a project. It just took us a long time to kind of figure out what we wanted to do, and how we were going to have an impact. And so, we found The Power of Words. One of the things we liked about it was, as much as this was inspired by my grandfather, this is something that could translate so easily to Maya Angelou’s words, or Malcolm X’s words, or Martin Luther King’s words. So that’s what were hoping to do: find people that have impacted people around the world with their words, and start working with young filmmakers to visualize and transform those into something that younger generations in this day and age can understand.

BE: What else are you two are involved in with the Nelson Mandela Foundation?

Ndaba Mandela: As far as the events are concerned, they’re really to celebrate [Nelson Mandela’s] life and his legacy. So, we have a few events planned out that should be taking place over the month of July [Mandela’s birthday month]. On top of that, we also have a digital campaign which we call Mandela.IS.Â The Mandela.IS campaign is essentially all about not using the example of our grandfather to not highlight people, but to also swing the pendulum and show light from us, and say, “This is a man that sacrificed his life to change and provide people with opportunities. How can we use that to inspire us to also be able to contribute to making a better world? How can we, by contributing to our community, by doing good in our community, inspire others to also continue doing that?â€

BE: Do you feel any pressure because of your last name?

NM: There’s a certain bit of pressure, I think, growing up. But as I’ve grown and become accustomed to it, I’ve come to realize that each person has their own choices to make, and it’s my destiny, ultimately. [I’m] following the footsteps, but in a way that will be able to capture the spirit the of the youth, the new generation, and make them understand, you don’t have to go to jail today, but in one way or another there are ways in which you can contribute to making things better in our own community.

But we’re not really compelled to do that, you know? I think for me, because I grew up with my grandfather, he really imparted most of these values that he has onto myself. So my grandfather is a person who’s very compassionate about humanity, about people, very much passionate about education and the value it brings to one’s life, and those kinds of things. It’s all about unity, it’s about progression, and it’s about community, ultimately.