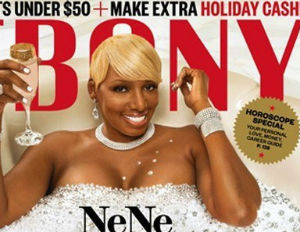 NeNe Leakes, the breakout star of VH1’s Real Housewives of Atlanta,’ landed the cover of Ebony magazine’s Power 100 issue, which spotlights the magazine’s choice of movers and shakers. But the choice to use the, um, outspoken reality T.V. star on the cover has not been without its critics.

“It’s the money and power issue, but the message doesn’t quite get conveyed that way,â€Â writes Brittney M. Walker at EURWeb. “It looks sort of cheap and gimmicky.â€

The online magazineÂ Clutch also addressed the cover, focusing less on the photograph and more on the statement thatÂ Ebony has made by selecting the controversial reality star for the honor. “Ebony boasts that it is ‘more than a magazine, it’s a movement,’ but does allowing Nene Leakes–one of reality TV’s biggest bullies–[to be on its cover] fall in line with that mission?â€Â Clutch asked readers.