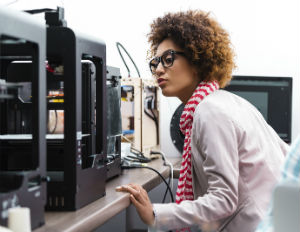 Engineers Robert F. Smith, Jeff Bezos, Michael Bloomberg, Larry Page–all have something in common–besides being exceedingly wealthy. They started their own companies.

In the new startup economy, engineers and others in “geekyâ€ fields are more inclined than ever to venture out on their own, even without previous business experience. Some, as those mentioned above, do extraordinarily well, but engineers considering the transition should be aware of a few challenges.

“Many of the developers I know are ‘product people’,â€ says Evan Rose, founder of Rose Digital, a minority-owned digital agency, and a web/mobile applications developer. “When you’re a person who is driven to create, you have the skills to [create], and the cost of launching a company is so low, it creates the perfect conditions for entrepreneurship.â€

Some engineers are motivated to create their own startups after disappointment working at established companies. “After spending 10Â years in engineering roles, I began to grow discontented with management,â€ says Todd Rhoad, managing director of BT Consulting, an Atlanta-based career consulting firm; a partner at Peachtree Recovery Services and electrical engineer.

As a career consultant, Rhoad offers advice for engineers who wish to start their own business ventures. “Running your own company will present numerous issues to solve every single day,â€ he cautions. “You have to develop your business and marketing plan; something engineers aren’t really great at.â€

Yet, some engineers remain hesitant to go solo. The reasons may be the same as for anyone else who is reluctant to open a business–lack of exposure and lack of capital.

Talitha Hampton, a chemical engineer and president of the National Organization for the Professional Advancement of Black Chemists and Chemical Engineers (NOBCChE), says, “It’s not common for you to see a chemical engineer as an entrepreneur. When I look at the ingredients of current entrepreneurs, they have a strong network, they have access to capital; and an understanding of tax benefits and tax law,â€ says Hampton.

For minorities, many who grow up in underprivileged communities, if you, for instance, go to school, become an engineer, and “get a job at DuPont– you made it,â€ Hampton says.