New Book Deals With the Hidden Black Women of NASA 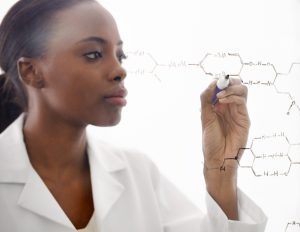 The upcoming movie Hidden Figures is a biographical drama about the incredible untold story of Katherine G. Johnson, Dorothy Vaughan, and Mary Jackson. They were brilliant, African American women working at NASA, who served as the brains behind one of the greatest operations in history: the launch of astronaut John Glenn into orbit and Neil Armstrong on the moon.

This stunning achievement restored the nation’s confidence in NASA, turned around the Space Race, and galvanized the world. The film, which debuts nationwide on January 6, 2017, is based on the nonfiction book of the same name, by Margot Lee Shetterly, whose father worked as a research scientist at NASA-Langley Research Search.

The latest chapter in stories that delve into the history of the black women in NASA that helped launch spaceships is the new book Hidden Human Computers. Written by Sue Bradford Edwards and Duchess Harris, who made national headlines for their book Black Lives Matter, Hidden Human ComputersÂ is geared toward grades 6-12, and it explores the plight of black women hired to perform complex mathematical calculations for NASA beginning in the 1940s. It’s a story gaining more attention from the general public as a result of the release of the filmÂ Hidden Figures,Â but for Harris, the accomplishments of black women was never hidden at all–it was just family history.

“My grandmother was in the group of the first 11 black women recruited to work at NASA, and I’ve wanted to tell this story for 25 years,â€ said Harris, in an interview with theÂ Minneapolis Post. “NASA had hired white women to be human computers, and there weren’t enough to work on the project they were doing. So, they went over to Hampton to see if there were enough black women who could do math, and my grandmother had a chemistry degree from Talladega College [in Alabama], even though she had been born in 1907.â€

Harris, who holds a Ph.D and J.D., is a professor of American Studies at Macalester College and author of Black Feminist Politics from Kennedy to ClintonÂ ($32.00, Palgrave-MacMillan,). Hidden Human ComputersÂ is part of the Hidden Heroes series from ABDO Publishing.

While the book Hidden Human Computers and the film Hidden Figures aren’t directly connected, they share the same message about powerful black women involved with the space program, bringing to light that same hidden portion of black history.Â They also speak to the ongoing topic of women working in science, technology, engineering, and math, or STEM. The hope is that the film and these books inspire women and young girls of color to follow their dreams, especially in STEM fields.