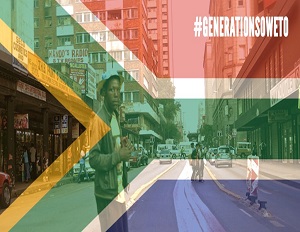 It’s no secret that today’s digital age has made it far easier to make global connections and stay abreast of the political and social events taking place abroad. But even with the Internet and social media bringing about awareness of different cultures and practices, misconceptions and stereotypes still persist about what it’s like to live, work, and find success in another country.

That’s why veteran producer Nisa Ahmad is making it her duty to bring Generation Soweto to life. After taking a personal trip to South Africa earlier this year and spending a number of days in Cape Town and Johannesburg, Ahmad knew she had to document her experience. Her interaction with young professionals, entrepreneurs and tech junkies in a developing country inspired her to create a film that will allow her to share the experiences of four South African millennials with the world.

[Related: [STUDY] Millennials More Likely to Want to Start a Business But Can’t]

“These young kids, kids that in America are still living with their parents, are running companies. One of our cast members is a blogger and she learned how to code by using YouTube tutorials. It just inspired me that in the face of adversity they are not letting anything get in the way of them and their dreams,” Ahmad told BlackEnterprise.com.

With Generation Soweto, Ahmad and her team plan to take a look at the political and social climate of South Africa 20 years after apartheid, while exploring the job market, entrepreneurship, rising cost of living and technology through the lens of four adults ages 18—30.

“I hope this documentary builds a bridge between millennials around the world and show how similar millennials are and how connected they are through the Internet,” Ahmad said.

Using her personal savings and the help of friends to get Generation Soweto off the ground, Ahmad has launched an Indiegogo campaign to help fund the project to completion. With the goal to raise $80,000 by Aug. 31, 2015, donations to the campaign will help with production, post-production, and travel cost, with rewards being offered to supporters ranging from digital download of the movie to executive producer credits on the film.

“With your contribution, you make a difference not just for those in South Africa who are telling their stories through Generation Soweto, but you will actually be supporting positive images of youth in a country that has known such social and political hardships,” Ahmad said in a statement on the campaign’s website.

To learn more about Generation Soweto, visit their website at generationsoweto.com and support their campaign page by clicking here. Be sure to also check out the documentary’s trailer below.