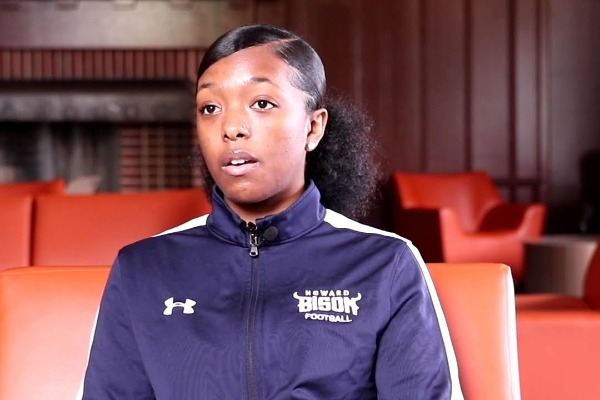 Janice Pettyjohn is the first woman hired for a full-time football position at Howard University.

The almost 23-year-old South Jersey native is applying her lifelong experience managing sports teams to lead the football team at one of the country’s most popular HBCUs. Her role comes one year after Pettyjohn graduated from Howard’s Sports Medicine Residency program with a minor in sociology.

“I’m super grateful for this position,” she told Burlington County Times. “Being 22 years old and getting a full-time position at Howard fresh out of college—it’s rare. Coach (Larry) Scott really saw the potential in me.”

According to the newspaper, Peettyjohn is the assistant director of football operations in addition to taking on the responsibilities of director of on-campus recruiting. This position was developed specifically for her.

Pettyjohn has been managing teams since middle school. It was something she picked up as an extracurricular activity despite being a painter and art enthusiast.

“I started managing the basketball team in seventh grade then I did it in eighth grade and it ended up just becoming something that I loved without realizing that I love because it just became second nature,” she said.

“She was always organized, she took on a ton of tasks, and we never had to worry about game set up,” Haussman said.

At Howard University, Pettyjohn wasted no time securing a spot with the Bisons. While an undergrad, former head coach Mike London offered her a position as a graphic designer and equipment manager.

“I was always the person kind of with that mentality like that if it has to get done, I’m going to be the one that gets it done.”

Now, less than a year after walking across the aisle to accept her undergraduate degree, Pettyjohn is returning to her alma mater with a history-making start to her career.