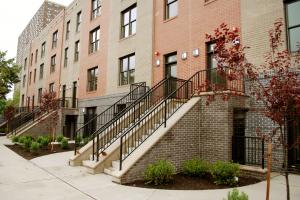 PART ONE OF A TWO-PART SERIES

When most people looked at Newark, New Jersey’s Lincoln Park neighborhood in 1999, they saw a low-income community with transient residents, vacant lots, abandoned buildings, a four-acre, drug- and prostitution- infested park, and a dilapidated Symphony Hall as the only redeeming asset, but Baye Adofo Wilson saw green.

Before the word “greenâ€ became Ã¼ber-chic, Wilson envisioned a sustainable urban eco-community that would tie together residents’ concern for the environment with economic and social development.

Now, as the executive director for the past five years of the Lincoln Park Coast Cultural District (LPCCD), a community development corporation, Wilson has made inroads to create an urban eco-village with a thriving economy sustained by green jobs and a budding arts and culture community.

“If we are going to build a long term sustainable community it has to be accessible in terms of affordability,â€ Wilson says.

At one point in time Lincoln Park was an exclusive neighborhood home to two New Jersey governors and the founders of Prudential Life Insurance. However in the 1950s and 60s, middle-class inhabitants left the city and the Newark riots of 1967 diminished the neighborhood’s appeal even further. The community almost rebounded in the 1980s when several activists, investors, and city officials tried to build an arts community, but the funding was inadequate and interests waned.

Wilson realized his goal was to restore the neighborhood to its former prominence during the 1920s when Symphony Hall, the 2,800 seat performance venue with a ballroom that seats 1,000, was a major attraction that drew crowds from out of town to see vaudeville acts. Plans to renovate Symphony Hall are still in the development stages.

Symphony Hall anchors his vision, but surrounding it the LPCCD has already started building multi-use housing, arts and culture businesses, and clearing out vacant lots to develop open space for an organic farm called the Brick City Urban Farm. Complimenting the green housing and the Symphony Hall are plans to create the Museum of African American Music, a Smithsonian-affiliated museum, honoring music legends with concerts and exhibits.

Wilson hopes these projects will create 200 jobs in Lincoln Park by 2010. He estimates that 35% of those will be created by arts and culture businesses, while 50% will come from construction projects. The corporation received $2.5 million and $1 million in subsidies from the city of Newark and the State of New Jersey respectively to put the different projects in motion.

“The community was devastated by urban flight. Now everyone realizes that these locations