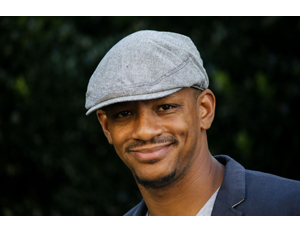 Nat Cummings is a talented computer hacker using his skills to pay his college tuition. A covert operative, he is well-versed in hacking, hand-to-hand combat, blade combat, andÂ stealth.

All is well with Nat until he isÂ listedÂ as an International TerrorÂ Threat,Â­ Code Red. The newlyÂ formed government/paramilitaryÂ organization called The Establishment givesÂ him a simple choice, eitherÂ workÂ withÂ themÂ toÂ become a highly trained assassin orÂ be terminated.

Nat is the protagonist of a new science fiction comic book series, P.B. Soldier. The series not only promises an exciting story of an African American antihero, but it is designed to teach STEM skills.

Gifted is not only the comic’s writer and creator he is a long-time math teacher, was an engineer, and is currently an administrator for the Pre-Academy division of the New Jersey Public Schools system.

Today, PBS Media is launching a Kickstarter campaign to raise $8,500 for the production of episode 3.0, the sixth installmentÂ ofÂ a 13 bookÂ arc. FundsÂ will go toward payment to line artist and colorist Abel Garcia, andÂ the actualÂ production of the book, including printing and distribution. A portion of proceedsÂ will go to the Central High School PreÂ­Engineering Academy in Newark,Â New Jersey, where Gifted hasÂ taught and led forÂ the past 13 years.