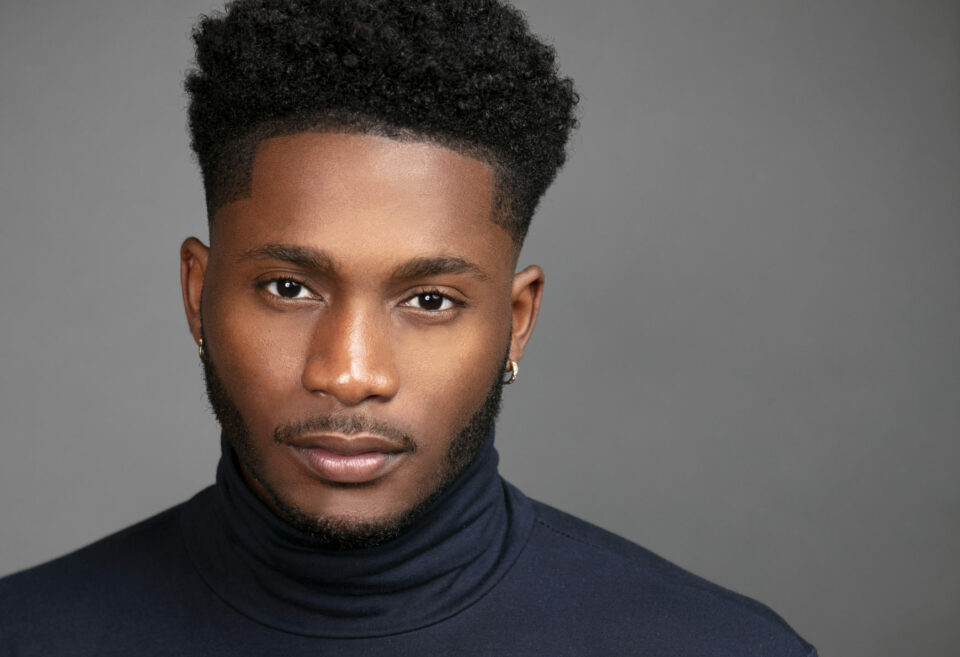 Actor Abraham D. Juste (A.K.A, Da’Vinchi) is a first generation Hatian-American born and raised in Brooklyn, whose personality, good looks, and raw talent have generated buzz in just three years.

“I didn’t think I had a chance. I wasn’t a child star or anything like that,”  Da’Vinchi tells BLACK ENTERPRISE.

“Before I got in to acting I was hustling. I was in the streets of New York promoting, and doing some under the table stuff. I was also doing my music. One day one of my friends invited me out to Los Angles to meet their manager. I felt like I was old [21]. And things took off from there.”

After an array of smaller roles (The Way Back, Grown-ish), Da’Vinchi is starring in the highly anticipated series Black Mafia Family from executive producer Curtis “50 Cent” Jackson and prolific writer-executive producer Randy Huggins.

BMF is inspired by the true story of two brothers, Demetrius “Big Meech” Flenory and savvy business acumen of Terry “Southwest T” Flenory (Da’Vinchi), who rose from the poverty-stricken streets of Southwest Detroit in the late ’80s. The brothers’ vision influenced hip-hop and every street corner dealer.

BMF is about the hard pursuit of the American Dream, capitalism, love, and family. Da’Vinchi talked about the series, his new Broadway show, and why anyone can do what he does.

BLACK ENTERPRISE: Tell us about your role in Black Mafia Family? How were you selected for this role?

Da’Vinchi: In BMF I get to play Terry Flenory, he’s Big Meech little brother. I’m the genius to our corrupt family operation. The streets were not the way that Terry wanted to originally take. He really did try to go the school route. His mom even wanted him to take the school route. But with major pressure from his brother, it was like he couldn’t refuse the high calling of the streets. Meech convinces him that the streets are his best bet out of life. Basically, there’s no other options in life but this way of living. With his street savviness and [my character’s] brains, we were able to change Detroit, other states, and then the entire country.

How I got the role was I auditioned for the role, went to testing, and got the role. It wasn’t a long process. It was one audition. For some people it was a much longer process. I was fortunate not to have to do all that.

How does it feel to break in the industry as quickly as you have? Most don’t get the opportunities that you have.

That’s true. That’s a great question. I feel extremely grateful and blessed. I know behind the scenes I put in a lot of work to stay disciplined. To me it doesn’t seem as fast as a lot of other people are seeing it. I have to look at reality. A lot of actors can live four lifetimes and not be able to do what I’ve done in one lifetime. It makes me feel like I have to pay it forward. I have to reach back and help the next man to get on. That’s my goal. I’ve been extremely blessed. I’m very fortunate to be in this position so young.

You just mentioned that you do a lot of things to stay disciplined. What are the things that you do in the background What are some of the things you do to hone your craft?

I have a limit on how much fun I have. And usually I’m studying, working with different coaches. [I] read a lot, meditate, try to stay grounded as much as possible; not get so caught up in this life. Behind closed doors, the way I live my life is not like the normal entertainer. It’s very controlled. I’m not wilding out. Sometimes I will go out, but it’s like on off season. It’s very controlled.

You’re going to Broadway this fall with the highly anticipated show, Thoughts of a Colored Man. Talk to me about it.

Well, it definitely was a smart move. It shows a lot of range. From going on screen and playing a drug dealer and telling that story, to now  going on Broadway in New York City. I think it’s a good lineup for my career. It’s a good set up. Thoughts of a Colored Man is about the seven different emotions of a Black man: anger, passion, lust, wisdom, love, happiness, and depression. I think it’s a genius approach of telling the story about a black man in this country  through emotions. It’s pretty dope. On October 31, Broadway will change.

What do you want people to know about you other than that you are an actor?

I want people to know that I am no better or no smarter than they are. I’m a common man like everyone else. It’s not impossible. I’m the story of the underdog coming to the top. I’m not doing anything that you guys are not able to do. When I was a kid I would see people on TV and think that they must have something that I don’t possess and that why I’m not there. No. That’s not true at all. There’s no big shots in reality. That’s what I want people to know about me. I’m no better than you are.

What words would you like to leave with the readers?

You can check out Da’Vinchi on BMF on STARZ, Sundays at 9 p.m. EST.