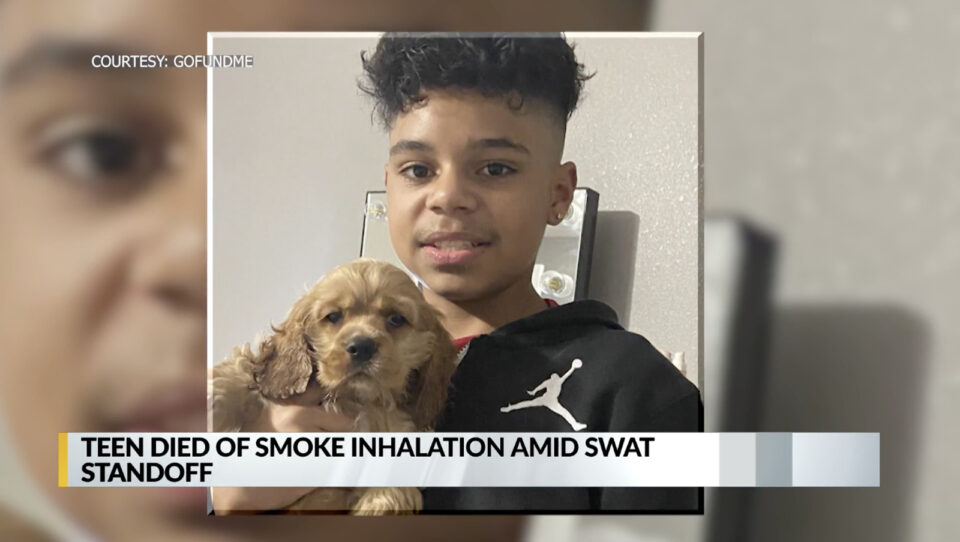 A 15-year-old boy in Albuquerque, New Mexico died in a house fire early Thursday after a SWAT team launched tear gas into the home while in pursuit of a “dangerous” suspect, according to a news release by the Albuquerque Police Department.

The police announced Sunday that the deceased teenager was identified as Brett Rosenau. The preliminary results of an autopsy cited the cause of death as smoke inhalation.

“In our effort to track down and arrest a violent criminal, a young person tragically lost his life,” APD Chief Harold Medina said in a statement.

“I know many people in our community are hurting right now, and appreciate everyone’s patience while the incident is thoroughly investigated. If any of our actions inadvertently contributed to his death, we will take steps to ensure this never happens again. I’ve asked our Victim’s Services Unit to work with the family and provide them support during this painful time.”

Detectives were searching for 27-year-old Qiaunt Kelley, who violated probation for armed carjacking and stolen vehicle charges. The report says that Kelley “fled from detectives and barricaded himself inside the home” on Wednesday, which Rosenau “followed” him into.

In effort to clear the house, SWAT officers tried for several hours to get the pair to exit the home from “public address announcements” to “placing a phone into the residence to make contact.”

Contact was never made, so police decided to take more extreme measures. According to the New York Daily News, police used a drone and robots to “activate powder irritants” inside the home to force the two males out.

At one point, Kelley opened the back door and laid on his back. He eventually sat up, while officers used a “noise flash diversionary device” to get Kelley to follow commands. But he went back into the home, shutting the door behind him.

Soon thereafter, smoke began to appear from inside the house as a result of an active fire. Kelley finally exited the home with burns, and was taken to a hospital for treatment. He was later arrested and booked into jail overnight on his warrants.

Rosenau was found dead inside the home.

Albuquerque Fire Rescue is conducting an arson investigation to determine the cause of the fire, which may take about two weeks, according to police.

The report says “because the death occurred while police were taking a suspect into custody, a multi-agency task force is conducting a criminal investigation, and the results will be forwarded to the District Attorney for review.”

“The police had every opportunity to save Brett’s life but instead chose inaction. Brett’s family and community are forever left without their son, brother, and friend. There will be an unfillable void by the loss of his life,” Rosenau’s family said in a statement, per the Albuquerque Journal.