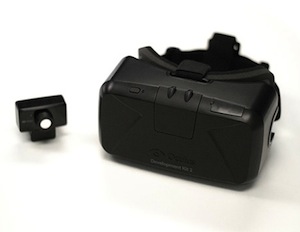 Virtual reality just took another step forward thanks to Oculus VR and its newest developer kit, the DK2. The head-mounted virtual reality goggles have been updated with newer internals and a new camera, making the world you see more immersive.

There are a slew of improvements in the new kit, bringing it closer to reaching consumers, starting with lower latency and less motion blur, reducing the motion sickness that many early adopters reported feeling during use.

The new 1080p display built inside the kit also help with providing a more seamless experience. “DK2 uses a low persistence OLED display to eliminate motion blur and judder, two of the biggest contributors to simulator sickness,” said the company in a blog post. “Low persistence also makes the scene appear more visually stable, increasing the potential for presence.” Top to bottom, the DK2 is an improvement.

It also comes with a motion tracking camera to see how your body moves, making the feeling of looking around less jarring.

Oculus VR is still a small company, however, and giants are starting to step into the virtual reality space. The reveal of the new developer kit comes less than a day after the debut of Sony’s own VR headset at San Francisco’s Game Developer Conference, codenamed Project Morpheus.

While this isn’t Oculus VR’s consumer version, interested developers can grab the kit for $350, $50 more than the previous Oculus Rift developer kit.