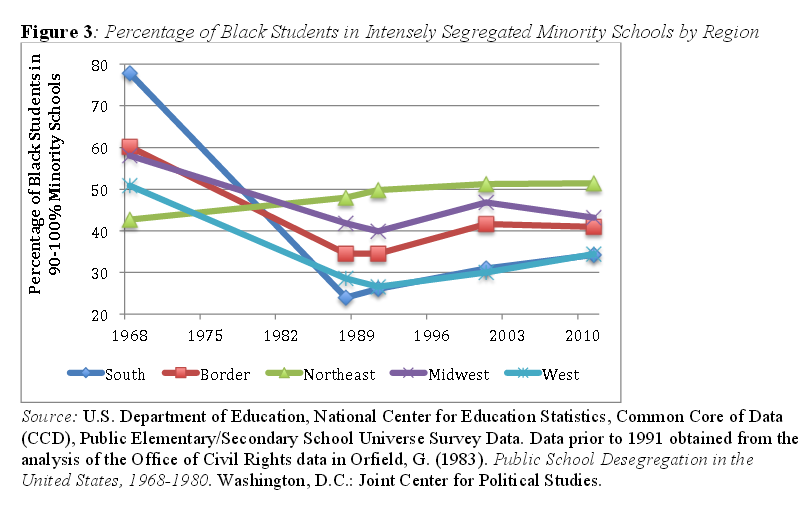 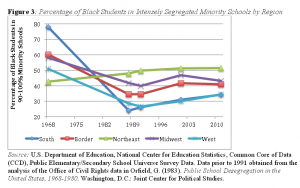 Just two days before the 60th anniversary of Brown v. Board of Education, researchers at UCLA’s Civil Right’s Project have released studies that find segregation to still be very prevalent within the American school system.

Showing data that provide a breakdown by region of student integration from 1968 to 2010, the report titled “Brown at 60: Great Progress, a Long Retreat and an Uncertain Future”, proves that although progress has been made in the six decades following the Brown decision, we must pay attention to the growing areas that need improvement.

RELATED: 60 Years Later: Sherrilyn Ifill On the Legacy of Brown v. Board of Education

According to the graph, Northeast schools are the most segregated, followed by schools in the Midwest, Border states, West and then South. For states such as New York, Illinois and California, the percentage of black students being isolated is the highest.

The report also shows that the percentage of Latino students in schools has increased over the years and so has Latino segregation. According to the research, black and Latino students often tend to be in the same schools with a substantial number of children from poor economic backgrounds, and are separated from whites and Asians who typically attend middle class schools.

“Brown was a major accomplishment and we should rightfully be proud. But a real celebration should also involve thinking seriously about why the country has turned away from the goal of Brown and accepted deepening polarization and inequality in our schools,” says co-author of the study and Co-director of the Civil Rights Project Gary Orfield.

While school segregation is nothing like what it was 60 years ago, data from the study prove that segregation in all regions continue to be on the rise.