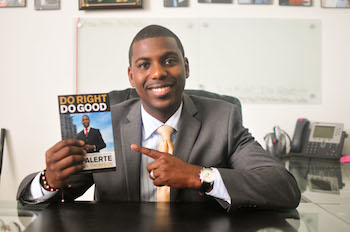 Recently in Brooklyn, N.Y., five budding young minds were awarded for their resilience, determination, positive effect within their academic ranks, and overall powerful spirit at the Second Annual “Do Right, Do Good” Scholarship ceremony.

Led by successful entrepreneur Jean Alerte and New York City Council member Robert Cornegy (36th District), education and inspiration were the themes highlighted at Brooklyn’s Borough Hall. Four triumphant young people were being celebrated for their “Do Right, Do Good” attitude, as they each individually overcame adversity to become upstanding members within their respective communities.

Inspired by Mark Twain, Alerte and his associates wanted to double-down on empowering the youth by honoring deserving scholars who are working on attending college. Supporting this positive endeavor were politicians such as the aforementioned Robert Cornegy Jr., Sen. Kevin Parker, Brooklyn Borough President Eric Adams, and New York City Mayor Bill de Blasio. Last year, Alerte and company awarded 15 students with scholarships, which were powered by sales from his book by the same name (Do Right, Do Good).

The Brooklyn Swirl owner partnered with former NFL star Tutan Reves of Beyond the Boroughs National Scholarship Fund to administer awards of up to $2,000 per year, renewable over four years. Beyond the Boroughs is a 501-c3 public charity that awards “last dollars in” scholarships to students across the country.

As the “Do Right, Do Good” team continues to celebrate the accomplishments of young academics across the globe, Jean Alerte and all of his entrepreneurial connections continue to selflessly contribute to the improvement of our neighborhood and its residents. We here at Black Enterprise commend all parties involved (and the sponsors) for helping these students take one giant step closer to their goal of attending college regardless of circumstance.

While only four were present to receive their scholarships, each individual has a story that is worth reading about and appreciating. We were fortunate enough to get the full scoop on each student and a video recap of the event that you can see on the next page.