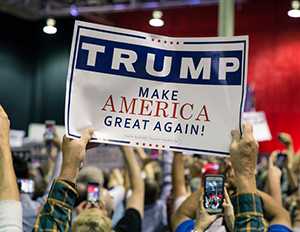 The former House Speaker Newt Gingrich was the first of three to take the stage to kick-start the New York delegation. He explained how Donald Trump created a brand new way of campaigning through the use of media and used it in such an unprecedented way by saving millions per day in free advertising. He compared it to Secretary Hillary Clinton $20 million in advertising expenditures last month compared to Trump’s staggering ad spend of $0 (zero dollars).

The Hillary bashing was short-lived and he mostly talked about opportunities for the GOP:

1) Based on the fact that Republican voting numbers are up 63% compared to the lackluster performance of Democratic turnout, which is down 27%. All of which is because the country is not happy with the direction in which the United States is headed.

2) Don’t assume that Americans are happy with the way things are going, and you should ask voters a simple question, ‘Are you happy?’ and ‘Do you think things are working.’ He went on to say that if the person responds by saying it’s the best I ever had then they are likely not going to switch their vote in November. But every poll reflects that the majority of Americans don’t think the country is going well.

3) That’s our market, and touted his model of listen, learn, help and lead. It is impossible for people on the south side of Chicago to be happy with their living conditions with over 2,500 murders per year, being trapped in poor schools, or [no] well-paying jobs in their communities.

4) While that all sounds like a great opportunity, it make no sense unless you show up to listen. Newt must have been inside my head because he said, “We have to have the guts to show up in urban communities.â€ With the understanding that the urban leadership will call you racists because they don’t want to lose control. They thrive by hysteria because if we get an opportunity to win the urban electorate’s vote and deliver, then the left’s leadership has no argument and they can’t live by hysteria anymore. But we have to have the courage to withstand their attacks. We must focus on inclusion, not outreach.

5) How are you going to get people talking with each other? He said that part of the strategy should be inclusion, not outreach. Find a way to bring them together and organize. One person in a neighborhood gets isolated and coerced. But seven people form a group then you begin to procure change. This begins to start the conversation to be able to find common ground to make the changes needed to improve lives.

6) He went on to say that the challenge with republicans is that we have to accept the idea that the party will be 30%-40% bigger and they all will be strangers. They will share similar values but act, talk and think differently, but it will more dramatically reflect america. This year we have an opportunity to bring diverse people together and use social media to build something great.