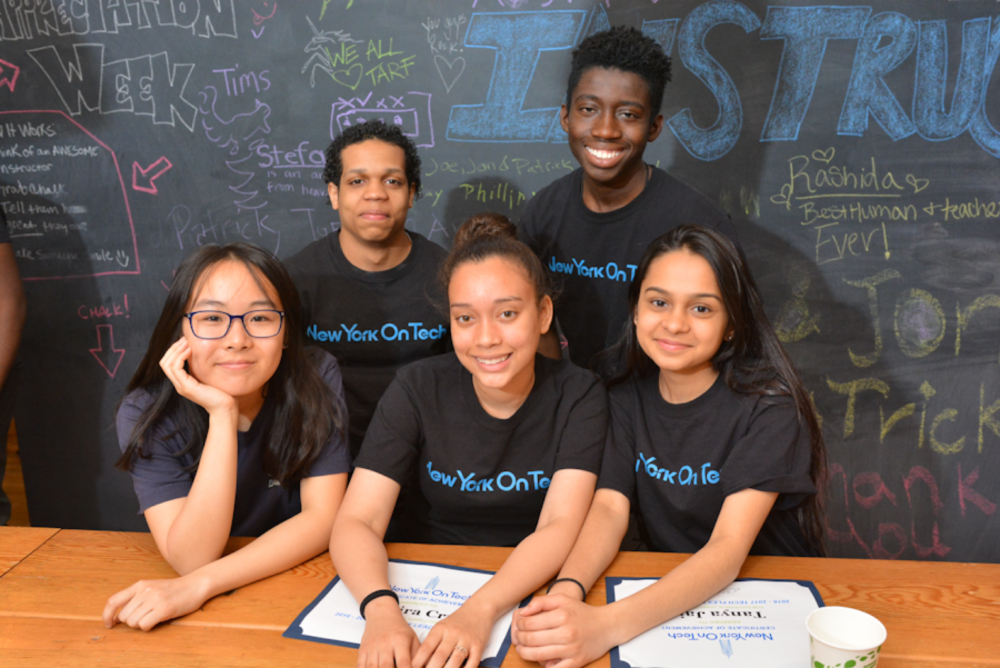 Courtesy of New York on Tech

New York on Tech deserves the recognition. From an idea initially sketched out on a Starbucks napkin, the organization, now 3-years-old, is driven by its mission: to prepare the city’s next generation of technology leaders by creating pathways that allow underserved students to succeed in technology and innovation—the backbone of the global economy.

According to stats included in their Forbes profile, only 1% of the city’s 1.1 million public school students are educated in computing and information systems. Yet, the jobs of the future—even those that aren’t specifically tech—will require this exposure.

NYOT provides opportunities for high schoolers to engage with tech and coding in its TECH360 program, a 10-week course held onsite at tech companies. Its students graduate from high school with critical exposure and a knowledge base they wouldn’t have had otherwise.

“We work with low-income youth of color in all five boroughs plus Yonkers,” Santana told me. “We’re in 50 high schools where at least 50% of students are eligible for free or reduced lunch.”

Students get embedded in companies and are tutored by volunteer engineers from the host organization. They’re taught by industry professionals, so the curriculum is industry aligned.

The other advantage to this arrangement, Robinson notes, is that the students are developing their social capital and creating personal networks.

“We also champion internships at our organization,” says Robinson. “Technologists see the talent and understand that with the right incubation the potential of these students is limitless.”

Hitting All Its Targets

Santana and Robinson told me that NYOT’s growth has been mostly organic, though they do send program managers to schools to inform them of their program, which is free to students.

For most of the students, learning about technology is new.

“Ninety-three percent have had no previous exposure,” Robinson says.

To participate in NYOT students must have a GPA of 75 or higher. They must also submit a transcript and be interviewed.

NYOT’s four objectives, first articulated on that Starbucks napkin long ago, are to provide the students the following:

NYOT seems to be hitting all its targets. One hundred percent of its alums have been accepted to college and 100% say they would recommend NYOT to a friend; 91% agree that “NYOT greatly increased their chances of obtaining internships, professional opportunities, and careers in the technology industry in the future.”