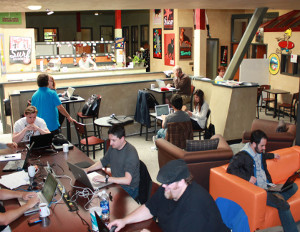 NextSpace, a network of co-working spaces in Northern and Southern California, has raised $825,000 in new funding.

Co-founder and CEO Jeremy Neuner opened the first NextSpace location back in 2008, and has now expanded to six locations, including two in San Francisco. The plan is to add two or three more this year. Neuner says the company has now raised a total of $ 1.7 million from assorted angel investors, friends, and family.

NextSpace can be described as less of a rented office space, and more like an open workspace. Work-at-home employees, entrepreneurs, and more buy a monthly membership that gives them access to office space, Wi-Fi, and, other entrepreneurs. NextSpace’s members span 30 different industries – from software and design to architecture, healthcare, engineering, and more. This environment stimulates collaboration between groups. One company, named Rally Up, met at a NextSpace and ended up being sold to AOL for a rumored 10 million.

“There is no doubt that the workplace is changing rapidly, and employees’ needs are shaping that transformation. It’s no longer about employees adapting to their work environment, but the needs of the worker shaping their workspace,â€ said David Gensler, of design firm Gensler, who’s joining the company’s board of directors.

“The future of work is fluid, fast changing and free to rearrange itself. Several factors have set ‘the office’ on a new course to address the new growing demands of the current workforce, which include being untethered, the push for more work/life balance, and utilizing under-utilized real-estate,â€ said Neuner.