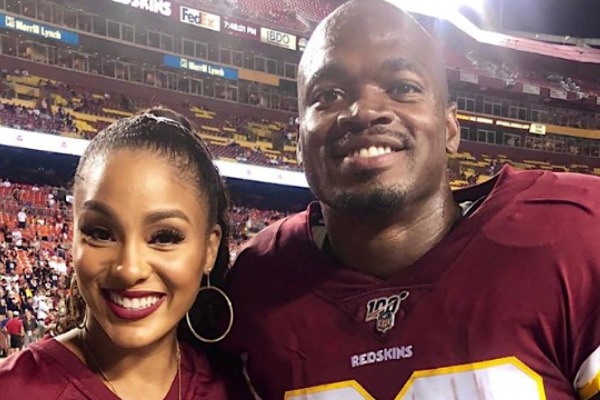 NFL free agent Adrian Peterson says he’s “mind blown” after being arrested for a domestic dispute he had with his wife at Los Angeles International Airport.

Peterson was arrested early Sunday morning over allegations of domestic violence aboard an aircraft bound for Houston, ESPN reports. Police responded to a call around 8:30 a.m. local time about “a verbal and physical altercation between a male suspect and a female victim.”

Peterson was booked at the Los Angeles Police Department Pacific Division with a $50,000 bail. On Sunday afternoon, he was released on bond ahead of the Super Bowl between the LA Rams and Cincinnati Bengals.

A rep for Peterson confirmed that Peterson and his wife, Ashley, “had a verbal argument” en route to Houston. During the spat, Peterson grabbed Ashley’s wedding ring and ended up scratching her finger.

The source said Ashley Peterson had no plans to press charges.

“This is a private misunderstanding between husband and wife and we anticipate it will all be resolved shortly,” the Petersons’ representative said in a statement.

Since the arrest, Peterson said he is completely surprised by the arrest over a minor dispute he had with his wife.

“I was literally mind-blown that they took me to jail,” Peterson told Fox 26. “They were like, ‘I’m sorry, Mr. Peterson, but because she had a scratch on her finger, [in] the state of California, we have to take you in.’”

“I sit there and watch the plane pull back and take off and I’m just like, ‘Wow! I cannot believe this is happening right now. I’m going to jail, and I literally didn’t do anything.’”

“It’s blown out of proportion,” he said.

“Me and the wife got into an argument on the plane. That was pretty much the gist of it. I ended up grabbing her hand and taking her ring off her finger. She didn’t press any charges. The state of California pressed charges because there was a scratch on her hand. Literally, that’s why I went to jail because the ring left a scratch on her finger. We just had a disagreement. I know the headlines: Domestic violence. You’d think I beat her up or something. It was nothing like that.”

Peterson insinuated that a fellow female passenger was the cause of the argument being blown out of proportion.

“She kind of made it more than it was and brought more attention to it,” he said.

“Only thing I will say is it looks horrible because Adrian Peterson [was] arrested for domestic violence. I don’t hit women. It’s not that type of situation, and it just looks bad. I’ll deal with it, and God willing, get the charges dropped and move on.”

Peterson’s latest arrest comes nearly eight years after being arrested in 2014 for allegedly beating his then 4-year-old son with a tree switch, NY Post reports.

After pleading no contest to a reduced charge of misdemeanor reckless assault, Peterson received two-year probation, was fined $4,000, had to perform 80 hours of community service, and was suspended from the NFL for one year.