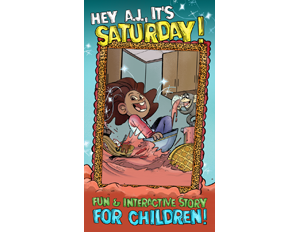 You may know that New England Patriots’ Martellus Bennett holds the 2015 record for most catches.

You may not know that, in addition to playing professional football, Bennett is an artist, animator, author, producer, composer, and CEO of Imagination Agency. He is set to soon launch a children’s app and book series.

The Hey A.J. app is an interactive children’s picture book app. Kids help the main character A.J. along as she tries to make breakfast for herself on a Saturday morning. The kitchen is filled with whimsical other characters, including bacon-frying pandas, monkeys, and horses also trying to cook breakfast.

The app has an accompanying book that is part of Bennett’s Hey A.J. book series. The book, Hey A.J. It’s Saturday, is set to soon release. The book series goes on sale this Father’s Day weekend.

“I wrote the ‘Hey A.J.’ children’s book series to always be there for my daughter even after I’m gone,â€ explains Bennett.

“As a father, I never want her to not have advice or food for thought from her father. Stories live on forever. This is a big part of my daddy legacy. The character A.J. is based on my daughter Jett and the adventures my family has. I want my daughter [and] other kids of color to grow up with a character of color that focuses on imagination and adventures; not just their skin color or hair.â€

During a recent trip to Los Angles, Bennett met with and gained interest from notable studios including Pixar, DreamWorks, and the Cartoon Network.

The creative Bennett also released a buzzed-about rap mixtape, Year of the Orange Dinosaur. The athlete spends much of the off-season in his home studio.

He gave a TED talk earlier this year where he discussed improving the public perception of NFL players by allowing himself to be seen and accepted as more than just a super athlete, but also as a creative professional dabbling in children’s books and animated films.