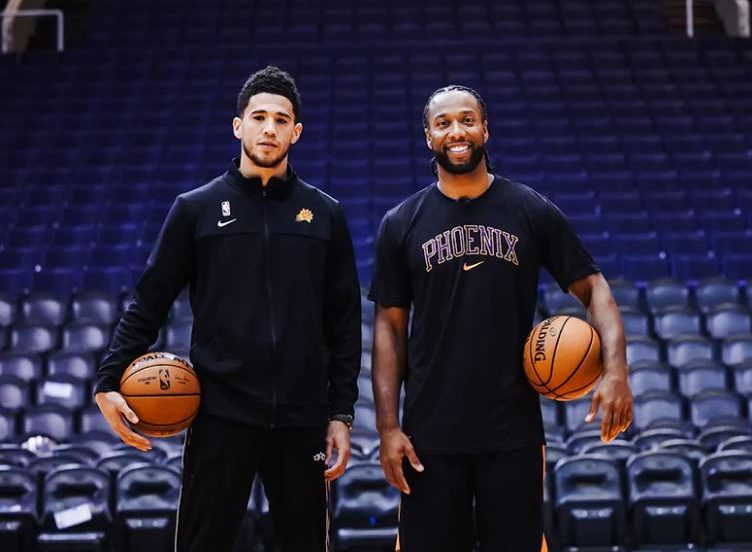 “Larry has been a great ambassador for our organization for years. He is an Arizona icon and a businessman, passionate philanthropist, and leader,” said Sarver in a written statement. “He brings a unique perspective from outside basketball but still grounded in sport, and we welcome him as a valued partner and investor.”

Two years ago, managing partner Robert Sarver suggested that Fitzgerald join the NBA team as he got to become friends with the Suns executive. Sarver and Fitzgerald first met in 2005, a year after Fitzgerald was drafted third overall by the Cardinals.

“It’s an investment in something I have supported since I’ve been in Arizona,” Fitzgerald tells NFL.com. “It gives me another connection in the community I love and always will live in. It’s a long-term commitment I wanted to make for life after football.”

“I’ve been friends with Robert for a very long time,” Fitzgerald continues. “We first met when I started coming to the games in 2005 and struck up a good friendship. He started helping me with things about business, like real estate. I’ve learned a great deal from him. We’ve gotten really close and our families have gotten really close, as well. I’m looking forward to working together in the future.”

Fitzgerald had this to say on his Twitter account, “It’s an honor to have the opportunity to invest in the @Suns, a historic franchise with a very bright future. I’m blessed to call the PHX community and the state of Arizona my home and I’m excited to make a long-term commitment as an owner, but more importantly as a fan! #Suns“

Fitzgerald becomes only the second active NFL player to own a stake in an NBA team, joining Green Bay Packers quarterback Aaron Rodgers, who purchased a stake in the Milwaukee Bucks in 2018. “Larry will serve as an advisor and resource to our business and basketball staff as well as Suns and Mercury players,” Sarver says.

Fitzgerald has just recently completed his 16th season and has signed a one-year extension with the Cardinals, with which he has been to a franchise-record 11 Pro Bowls and is the team’s all-time leader in receptions, receiving yards, receiving touchdowns, total touchdowns, 100-yard receiving games, and consecutive games with a reception. He is presently ranked No. 2 in NFL history in career receiving yards and is No. 6 in NFL history with 120 career TD receptions. He was recently named to the NFL’s 100 All-Time Team.

“I have a special place in my heart for the Phoenix Suns and Mercury, and I have a great deal of respect for Robert,” Fitzgerald said. “He has become a dear friend and a trusted confidante. He is a big part of why I am making this commitment.”