NFL Suspends Adrian Peterson Without Pay For Rest of The Season 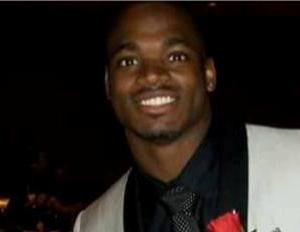 Minnesota Vikings running back Adrian Peterson has been suspended without pay for at least the rest of the season, the NLF announced in a statement on Tuesday. He will not be reinstated before April 15 because he violated the league’s personal conduct policy “in an incident of abusive discipline that he inflicted on his four-year-old son last May,” the league said.

Commissioner Roger Goodell notified Peterson by letter that he was being suspended for violating the personal conduct policy after pleading no contest to a charge of reckless assault earlier this month in Texas. He had been arrested for spanking his 4-year-old son with a switch, inflicting scratches and welts on the child’s arms, legs and genitals.

Peterson has been on the exempt/commissioner’s permission list–which kept him off the field, with pay–since September after the allegations. Initially charged with felony child abuse, Peterson pleaded no contest to misdemeanor reckless assault this month, according to CNN.

“The timing of your potential reinstatement will be based on the results of the counseling and treatment program set forth in this decision,â€ Goodell wrote. “Under this two-step approach, the precise length of the suspension will depend on your actions. We are prepared to put in place a program that can help you to succeed, but no program can succeed without your genuine and continuing engagement.Â  You must commit yourself to your counseling and rehabilitative effort, properly care for your children, and have no further violations of law or league policy.â€ Goodell went on to warn Peterson that any further violations of the personal conduct policy could result in him being banned from the league.

Peterson will appeal the decision, the NFL Players Association said. The NFLPA further said the discipline imposed on Peterson is “inconsistent” and it will “demand that a neutral arbitrator oversee the appeal.”

Peterson has not played since his arrest on the second weekend of the NFL season. His plea was entered and accepted Nov. 4 and, with that resolved, the league began to consider his status under the personal-conduct policy. It acted Tuesday, a day after a grievance hearing over the matter before the NFL’s arbitrator.

Peterson and the NFL Players Association contend that his status on the exempt list was his punishment; the NFL believes that because he was paid, he has not been punished. Arbitrator Shyam Das has five days in which to issue a ruling.