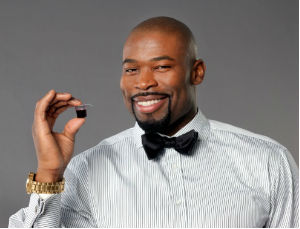 The NFL's Israel Idonije, the son of Christian missionaries, is founder of Blessed Communion.

The calling came with a blessing. They’d have gone anywhere in the world, but Otterburne Theological Seminary in Niverville, Manitoba (now Providence College and Theological Seminary) worked for Henry and Choice Idonije because it sponsored missionaries and their families. Henry preached, read and studied his way to his Masters in Theology and, before long, theirs was a full-time labor of love. Missionaries in the truest sense of the word, the Idonijes started a charity that fed the hungry known as “Street Love.”

Their oldest son, Israel, remembers how when hungry worshipers arrived at their door in Brandon (now the second-largest city in Manitoba, Canada), Henry would retreat to the pantry to give them whatever they had, often their last.

And if thou draw out thy soul to the hungry

and satisfy the afflicted soul;

then shall thy light rise in obscurity

and thy darkness be as the noon day …

“I always wondered about that my entire life,” says Israel, a 10-year veteran of the Chicago Bears. “We’d have a turkey or a chicken in the freezer, and people just showed up in need. They were on welfare. They didn’t have a lot but they were committed to doing the work of God. And all the work they did, they were blessed through their children.”

Over the course of his 10-year NFL career, Idonije has made a living on Sundays terrorizing the likes of Aaron Rodgers, Matthew Stafford and Robert Griffin III. With 7.5 sacks and 70-plus recorded tackles in 2012, he’s reportedly drawn interest from the Titans, 49ers, Cowboys and Giants. There are more years behind him than in front.

It’s why one day in 2008 he walked into his bank and decided to take a chance on an idea:Â In 2009, Idonije purchased what he describes as an impossibly ineffective machine that manufactured small communion cups. He formed Blessed Communion, a venture that sells dual-chambered, pre-filled communion cups and wafers. For churches and spiritual organizations that commemorate the New Testament tradition of The Last Supper, it is a sanitary and efficient option. The company is on track for projected sales of 40 million units this year. Arriving at that point is a lesson in trial and error and some hard, necessary business decisions.

“I’m a dreamer, when I first saw it I thought, where can we go from this?” he says. “I saw an opportunity to do something bigger. The previous owners [of the machine] were happy with where they were. And that’s where I saw an opportunity.”

Challenges, risks and an unsure payoff

Blessed Communion currently has three large customers — a national church supply store, a national bookstore chain, and an online retailer with national distribution. It also has a few private smaller churches as customers. In 2013, Blessed Communion will be introduced to dozens of groups including the Coalition of African American Pastors, mission trip coordinators, military bases and Christian-based media.

Israel consulted a California-based company to help produce a 100 percent Concord juice blend, and a wafer that melts without leaving an aftertaste.

Blessed Communion also offers a juice only product for churches not ready to transfer over to the prepackaged product. It also offers unfilled communion cups. Ten people work in the 10,000 square-foot factory in Chicago. Blessed Communion’s goal is to double growth by 2014.

The company’s ambition and accomplishment is a lesson in patience.

“I’m not a manufacturer by trade, not even a businessman.”

There was a lot of work to do. The juice in the cups, they soon found, went bad in four months. It was churning out crushed, deformed cups with holes in them. Eventually, it became apparent that considerable resources were going to be needed to get Blessed Communion to operate efficiently. The machine was completely rebuilt. It fills each cup, places each wafer on tops and pressure tests it. The product then gets sent to a third -party tester to verify the product is clear of bacteria.

To Israel, the venture combined innovation, global appeal and a positive impact on the community and their clients.

“It’s very important to Israel that all of his ambitions, business pursuits and humanitarian efforts be aligned to a purpose,” says Kelley Speck, who oversees Idonije’s business endeavors. “He seeks opportunities that are innovative, have a global application and reflect his core beliefs. He believes everyone, regardless of their circumstance, has the ability to do something to make the world a better place, and he continually strives to do his part.”

A life of service, a career in perspective

For Israel anyway, it was nothing out of the ordinary.

Football camp for youth near Chicago. Nearly 250 campers. His foundation supplied all the food.

It only sticks out to him because, the person who helped facilitate the sponsorship got a call from a former NFL player who was no longer in the league.

Now that he’s in the midst of the twilight of his career, his exposure in the community and performance on the field is about to pay off. This is a man whether he stays in Chicago or not, he has made an impact; but if Brian Urlacher is no longer a Bear, then aren’t all bets off?

“I’d love to end my career as a Bear, but you understand it’s a business. Sometimes those visions between players and the organizations don’t always align. But to spend 10 years in Chicago has been an unparalleled experience.”

Bears General Manager Phil Emery told reporters the Bears want to have him back.

“He’s done a number of good things and had a number of good games both outside and inside,” Emery said. “He’s a guy we will sit down with and talk to about coming back. So, he’s got versatility. That is a positive thing. He has done a good job for us.â€

“They’re in Canada, and this is the second year they’re retired. I pushed them towards relaxing because my success in the NFL and the money that comes along with that I have that platform. That’s their blessing. They’re set for life.”

Some of his competitive drive has come out in being the best in business.

“For us there isn’t any competition, we’re just looking to better the product. There are similar products, but they’re not at our standard. We’re just focused on continuing to be the leader in this space, gain market share and implement our game plan for this business.â€

Five years ago, Israel began preparing and planning for his transition out of professional sports. It was part of a higher calling, one he learned from the family that raised him.