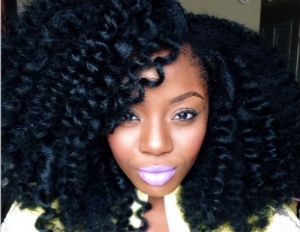 If you need more proof that once in a while it’s OK to break the rules to achieve success, meet 26-year-old Ngozi Opara, owner of NZO Hair Studio in Washington, D.C.,Â and founder of the Heat Free Movement (@HeatFreeHair). From leaving her job as a financial analyst to taking the leap into entrepreneurship to living in a factory in China so she could learn how to manufacture hair extensions, Opara is one of the fearless new faces revolutionizing the beauty industry.

In 2013, Opara launched Heat Free Hair, a protective style initiative offering 100% virgin hair exclusively for natural textures. Not only has she challenged the status quo of everything from what beauty looks like to how it’s packaged and delivered, she’s successfully turned her message into a movement by empowering women to who seek to embrace their natural textures.

With the black haircare market worth $684 million, according toÂ the market research firm Mintel, the buying power is tremendous.Â Black Enterprise.com caught up with Opara to get the backstory on what it takes to get a piece of this multibillion-dollar industry.

BlackEnterprise.com: How did you make your initial career switch from financial services to the beauty industry.

Ngozi Opara: I always had my foot in both hair and accounting. I went to hair school when I was 15. While I was in college studying finance and accounting, I was doing hair on the side. Then once I graduated I started working in finance but I was never really happy just doing finance. So I opened a hair studio. I quickly realized it didn’t make sense to do both. I was good at finance, but I had to ask myself, “Where does my passion lie?â€

How did you take the leap from full-time employee to entrepreneur?

I saved up enough money to survive without a job. Of course I was afraid of the idea of letting go of that security, but the fact that I was afraid meant I had to do it. I needed to conquer the fear.

Initially I had a timeline in my mind—I planned to quit around March 2012, but then I said August. Then something came over me and I decided to resign that day. I wouldn’t suggest that to everyone but for me it made sense.

What was the “aha momentâ€ that launched the Heat Free Hair Movement?

A lot of my clients were interested in transitioning to natural hair. I am a huge advocate of protective styling, but I almost felt like a hypocrite because I was weaving their hair, perming the hair left outside of the weave’s perimeter and spending a huge amount of time trying to cover their natural tresses.

So I thought to myself there has to be a way for these women to go heat-free and still embrace protective styles. That was my aha moment–I decided to start a heat-free movement. I really didn’t know what it would entail—maybe taking classes or even producing natural weave extensions. But once I put it out in the environment, things started to fall into place.

How were you able to turn vision into reality?

My sister and clients allowed me to cut some of their hair so I could find samples and textures. Eventually those samples were used as my initial prototype for the Kinks for Kurls collection. But, once I launched, I realized how I presented the product was great but I didn’t have the education that I needed to understand what goes into making a quality product. So I decided to go to China to learn how to manufacture the hair.

Although suppliers are located in India, 90% of hair is produced in China. I was connected to someone who was in Korea at the time who connected me to someone at a manufacturing plant. I was able to learn in six weeks what ordinarily would have taken six months. I lived in the factory, and I had a full-time translator during class. My classmates were definitely looking at me wondering, “Who is she?” But by the end of the program, I had developed some great long-lasting relationships.

Traveling to China was a huge breaking point for me. I was given an opportunity that is not readily available to foreigners. This experience really allowed me to understand the production process and how to produce different textures. Ultimately, I just don’t sell hair, I manufacture it and I can vouch for the integrity of my product.

What sacrifices have you had to make in building Heatfree Hair?

I needed to cut back a lot financially and condense my living situation. It was almost like solitary confinement! I was in the developmental phase of my business and still trying to transition from a 9-5 lifestyle–going to happy hour, etc. I sacrificed a lot of my social life. I love being on the scene, New York Fashion Week, etc., but I had to stop that and start building my dream. I am still making those sacrifices today.

You offer natural hair textures, which can sometimes be met with criticism. How do you handle that?

Some people said you couldn’t have natural hair and wear weaves. But everyone goes natural for different reasons. Because people put themselves in a box, they expect you to be in a box as well; when they realize you don’t want to be in a box with them, they’ll criticize you.

You have to know who you are and why you’re doing what you’re doing. No one has the ability to take away what you’ve been blessed with. Don’t give anyone that power. I know that people being negative is part of the process.