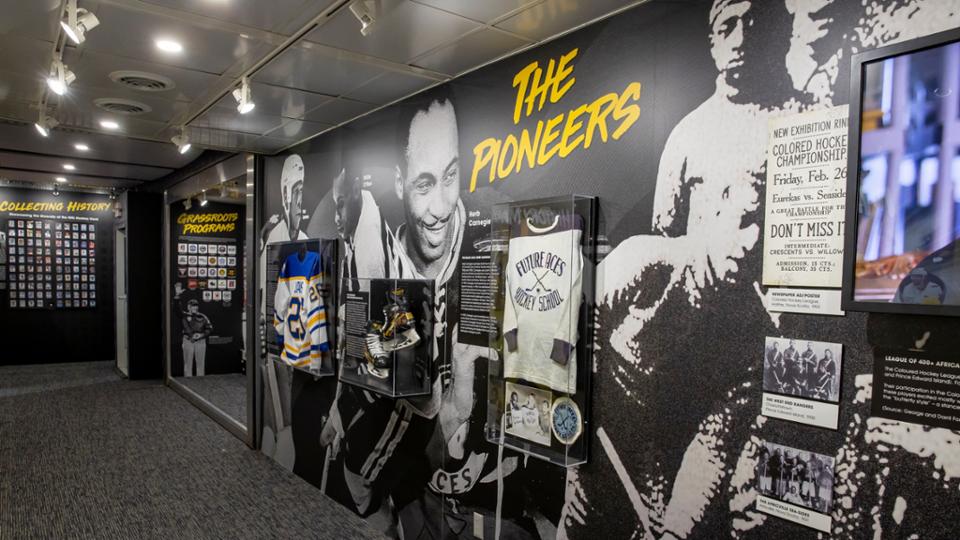 Rodney J. Reynolds was a hockey dad, having had to fully commit to the sport his son, Joshua, played and adored.

In the time he spent watching his son fall in love with hockey, Reynolds became motivated to shed more light on the Black pioneers of hockey’s history, its present, and its future.

According to NHL News, what started as a seven-city trip, the NHL Black Hockey History Truck Tour now presents a mobile educational exhibit that recognizes the historical impact of diversity in the sport to 28 different NHL markets and cities this year.

The @NHL‘s Black Hockey History Tour has arrived in Columbus!

Join us tomorrow as we celebrate the founders, trail blazers and future stars in Black hockey history! pic.twitter.com/zlcrsBpLL6

On tour, Reynolds intends for Black youth to have the opportunity to learn about the Black men and women hockey stars who look like them in the game. His intention is driven by the moment his son got the chance to meet Kevin Weekes and Willie O’Ree, two former Black Canadian hockey players.

Reynolds’ vision led him to land his current partnership with the Black history brand American Legacy Network he founded and its mobile arm, ALXMOBILE, with the NHL for the creation of the tour. The NHL Black Hockey History Truck Tour will showcase the League’s history of Black hockey players and its current Black stars with various interactive features, including special QR codes that visitors can scan to read more and watch videos on their phones. Admission is free for all ages.

The exhibits will have hockey cards on display featuring current and former Black players; multiple video features; recognition of the grassroots efforts to grow the game, including the NHL’s Hockey is for Everyone program; and an area featuring women of color who have made an impact in the game.

Additionally, the mobile museum will feature memorabilia from Black hockey stars throughout the game’s history. This includes jerseys and equipment from players such as five-time Stanley Cup-winning goalie Grant Fuhr and Val James, the first American-born Black player in NHL history, and the Tim Hortons-commissioned Barbie doll made two years ago in the likeness of Sarah Nurse, a Canadian hockey star and Olympic medal winner.

Reynolds said nearly 200 youth club teams had access to the exhibit in Minnesota.

“We’re featuring those players, those individuals who really had an impact on the sport of hockey,” Reynolds said. “It’s important for young boys and young girls that come on board to see people who look like them playing the sport.”

The tour took a traveling hiatus in 2021 due to COVID-19 concerns but will be traveling through April 2022.

The schedule of the tour is posted here.