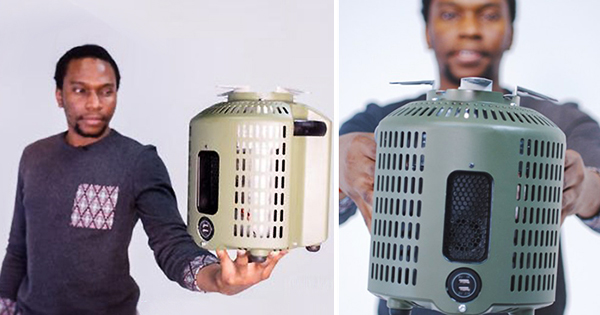 Max Chinnah is a 26-year-old Nigerian inventor and entrepreneur who recently invented a smokeless stove that doesn’t just cook food—the stove has the ability to convert that particular heat energy into electricity so you can actually charge your smartphone.

Chinnah, who is passionate about the world’s indoor smoke pollution problem, created The Genesys Cooker, which burns clean and generates enough power to both cook and charge cell phones, reports Next Billion. Chinnah, and his co-founder Godwin Attigah, won $10,000 and the Innovation Prize at Unite for Sight’s Global Health & Innovation Conference at Yale University back in 2016. The startup also has received funding from The Resolution Project, Duke Energy, and the Iowa Renewable Energy Association.

In addition, Chinnah’s company, Terraoak, will produce this game-changing product on a massive scale. Terraoak is a tech company whose mission is to provide innovative, cleantech solutions in the renewable energy sector. “Our flagship product is a patented smokeless cookstove that is also able to convert heat energy to electricity. At Terraoak, we believe that access to clean energy should be the fundamental right of every person, regardless of class or socio-economic background,” reads the website.

Although the audience Chinnah mainly focuses on is one that does frequent outdoor recreational activities, since this is a product for camping, he is planning to give up to a thousand of the stoves to Kenyan farmers, according to BlackBusiness.com.

Chinnah’s journey began when he was pursuing his graduate degree in Computer Science. According to BlackBusiness.com, he aspired to be an entrepreneur and do something that could make a positive impact in people’s lives. Then, after attending the Clinton Global Initiative conference in Miami, he decided to become an inventor

Using this invention, Chinnah’s next steps are to continually help reduce the consequences of global warming and making this product available to every single person.