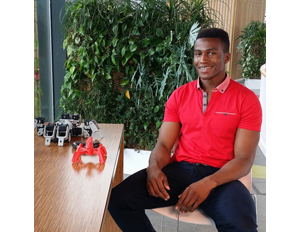 The robots can be operated via a smartphone. Two people can battle their robots against one another, or a single player can navigate his or her robot through an augmented reality world.

Black Enterprise sat down with Silas Adekunle, the founder of Reach Robotics Ltd, to discuss his creation:

Black Enterprise: Tell me about your company.

Adekunle: The company is called Reach Robotics, which I founded three years ago when I was studying. What we’re doing is combining frontier tech–robotics and augmented reality with gaming to create a new play experience. This is our first product, which we will be launching soon, called MekaMon (the reference is from PokÃ©mon).

So, this is my phone. I can go into a mode where I can customize the [robot’s] settings; this is where people learn how to pilot the robot. So, we’ve got this rich content universe. When it [the robot] takes a hit, it falls down. It’s got character and personality to it.

BE: If it flips over, can it correct itself and get itself back up?

Adekunle: Yes. Sensors allow it to be able to do that. The beauty of this is that it’s hardware, but it’s powered by software. Once we release the robot, we can keep updating it over time.

BE:Â So, this is a gaming device? This is for entertainment?

Adekunle: Yes. If you don’t have someone to play with, you can play by yourself. We have an augmented reality world that we built. If I go into something called simulation mode, you can look around to see that we now have virtual reality content in this room, but there’s nothing [there] in the real world.

If I fire at my opponent–I’m going to fire a missile at it–you can see that we’ve got this augmented reality world where the robot is interacting with things that don’t really exist. You can battle and go through these different stories we created.

Also, you have the two player experience; where you’ve got one [robot], and [someone else] has one, and you can battle each other.

BE:Â So, you’re from Nigeria? You sound like you were raised in Britain.

Adekunle: It’s just my accent. I travel quite a bit, but I grew up in Nigeria until I was about 11–in West Nigeria.

I’m a robotics engineer. I was studying robotics [before launching this startup], and I always had passion. Growing up in Nigeria, I had a lot of exposure to wildlife, so biology was close to my heart. I wanted to actually go into zoology, but then I loved engineering too much. So, robotics was a way to combine both of them.

I knew I wanted to make a living doing robotics, but I didn’t know how. I started a program teaching STEM to young kids from disadvantaged socioeconomic backgrounds, and that’s where the inspiration came.

We’re infusing robotics with gaming for products that can be engaging and lasting. I’ve spent the last three years perfecting this product. The company is expanding soon, and we’re quite well-funded. We did our Series C round recently. We don’t announce [numbers], because it’s a private company. However, there’s a lot of interest in the space from people; it’s a large market.

We built this to be something that’s accessible to everyone, but we are primarily focusing on 20 [years-old and older]. They are gamers, but we find a lot of interest from young kids, as well. This is something that can inspire them, and get them thinking about robotics. We’re shipping in January.

BE:Â Will there be an API available?

Adekunle: Definitely. So, it’s not part of the initial roll-out, but we [want to make it] where you don’t need prior knowledge of our programming “to get into” the robot. That’s why, in the back of the robot, there are already USB ports. It’s modular; I can pull out the legs. So, that means, in the future, you can imagine wheels, for example, or different modes of driving the robot around. It’s a hardware and software platform. We are launching directly to consumers, at first.

BE: What is the future of robotics?

Adekunle: They are going to get into every aspect of our lives. I think that’s a positive thing. It will allow us to unlock our creativity, and create so many opportunities to inspire young people. Look at the time cars were introduced– horse riders were annoyed that cars came along, but look at what [this advancement in] transportation unlocked.