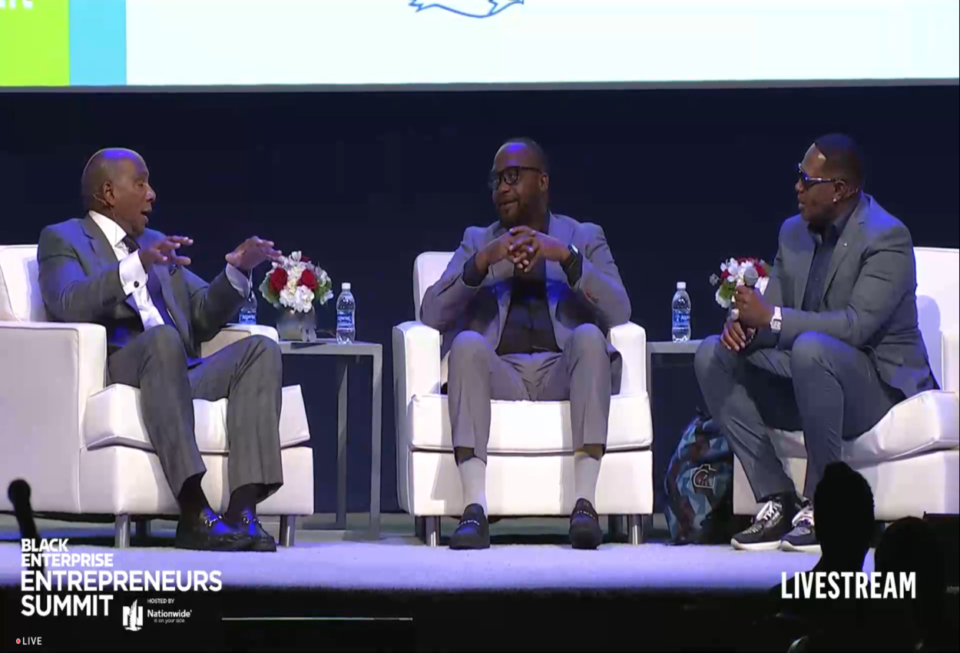 The conversation, moderated by BLACK ENTERPRISE Chief Executive Officer Earl “Butch” Graves Jr.,, began with him asking the two businessmen how they got their start and what made them want to be entrepreneurs. Lindsay told the audience he had an example to follow in George Johnson Sr., owner and founder of the Johnson Products Company.

“My first job was at a place called Johnson Products, one of the oldest Black companies in Chicago,” Lindsay said.

“I was fortunate enough to see another Black man being very successful, and I was able to sit close to Mr. Johnson and notice that we don’t produce enough products. Our communities are over-extracted and we’re buying everyone else’s product but our own, so I saw another Black man that had a product that was successful and it taught me the vision of, ‘Hey I can do that, I can be that guy.”‘

Master P, who used a $10,000 inheritance from his grandfather to purchase a record store at 19, said he quickly realized that working hard brought its own rewards.

“My journey wasn’t just No Limit blew up and became this successful company,” Master P told the audience.

“I failed so many times at business trying to figure it out, but [at] 19 it was hard for me to open a business in a place I knew nothing about,” he said. “I kept going, I didn’t give up, and I kept educating myself, and that was the thing that opened the doors for me. Everybody wants money, but I was seeking knowledge and information.”

The record producer and executive told fellow Black entrepreneurs to know their worth, using the story of the first record deal he was offered by Jimmy Iovine and explaining why he turned it down.

“You also have to know your worth no matter what you do. Knowing your worth is going to take you where you want to go in life,” Master P said.

“When Jimmy Iovine offered me $1million in the 90s, that was supposed to change my life, but looking at and reading that contract it said I was selling all my rights off and I couldn’t use my name anymore,” he explained. “That was just for a million dollars and I was already selling my records on the street independently. Turning down that money was probably the best thing I ever did. It pushed me to go back to the ghetto, work harder, and sell more—and that’s how I was able to build my empire.”

Lindsay, who has been running Rap Snacks for more than two decades, told entrepreneurs that when they come up with an idea, act on it, don’t sit around and wait.

“When you have an idea, the first thing you have to do is act on that idea,” Lindsay said.

“Once you act on it and you have some success, it grows confidence and now you have confidence but you’re seeking more information, and in the Black community today misinformation and lack of information are what’s creating barriers to being successful. So once we overcome that,, we’ll be there.”

Both men also talked about the failures they’ve experienced throughout their careers. Master P, who went from owning a record store to opening for some of the biggest artists, talked about trying to create a name in rap music at a time when all the top artists came from the East and West coasts.

“I got introduced as Mr. P., the country singer, and I had one guy jumping up to my music. And when I got that one fan, I said, ‘I’m going to turn that one fan into millions and through my failures, I was able to do that.'”

Lindsay, who said he looks at failure as an opportunity said his failure was the inability to see just how far Rap Snacks would go.

“When we talk about the brand today and selling it in Wal-Mart and Sam’s Club, my brain didn’t fathom that it could be that successful,” he admitted.

Both men added that those failures is what they learned the most from. They pushed the audience to learn from their failures and others as well.