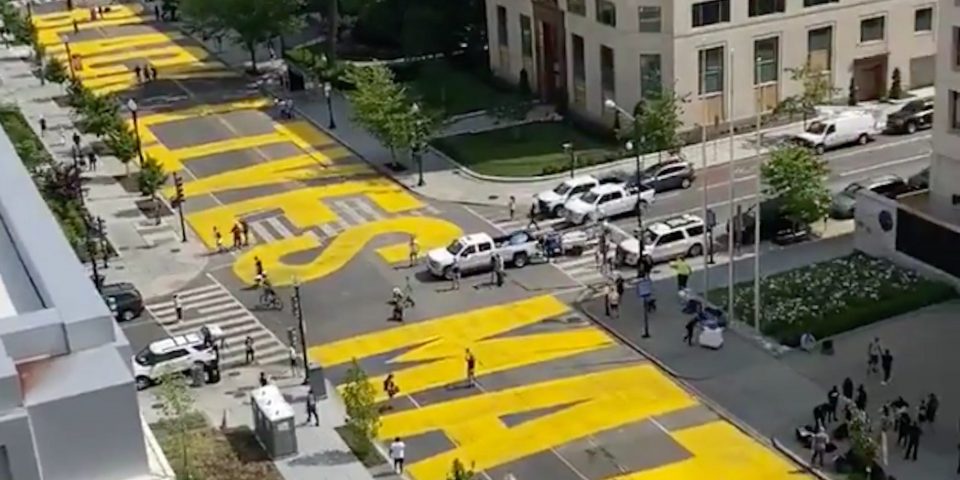 Andrew Brown Jr., a Black man, was killed in April by a sheriff’s deputy in Elizabeth City, N.C. The town is now asking artists to pitch ideas for a ‘Black Lives Matter’ street art project.

The project would be painted on the street in front of the Pasquotank County sheriff’s office, WAVY reported. Councilman Darius Horton introduced the idea. He remarked that he hoped the project, which would paint the words “Black Lives Matter” on the length of Colonial Avenue outside City Hall in downtown Elizabeth City, would send a message to the community that “yes all lives matter, but right now black lives matter”.

To start, artists who want to submit their artwork for the pro bono project must uploaded it to Elizabeth City’s  website by midnight June 9. The artist who receives the most votes will have their artwork illustrated on Colonial Avenue.

“Elizabeth City residents will then be able to review each artist’s submission and vote for their favorite rendering. The voting period will be from 6 a.m. June 10 to 6 a.m. June 16,” WAVY also said.

“Authorities wouldn’t provide details of the shooting but an eyewitness said that Andrew Brown Jr. was shot while trying to drive away, and that deputies fired at him multiple times. The car skidded out of Brown’s yard and eventually hit a tree, said Demetria Williams, who lives on the same street,” the Associated Press reported.

At that time, Horton said that  transparency and accountability would be needed. He called for the immediate release of bodycam footage, the search warrant, and a speedy explanation of whatever led to the shooting, the AP wrote.

WNCN recently added that after deputies shot and killed  Brown, dozens of people from Elizabeth City came to Raleigh to meet with Gov. Roy Cooper and other state leaders to call for greater transparency in that investigation and in similar ones. Additionally, WNCN reported that District Attorney Andrew Womble declined to pursue charges against the deputies. Brown, he said, acted recklessly when he used his car as a “deadly weapon” while attempting to get away from the deputies.

According to to the News & Observer, Brown’s attorneys said an autopsy showed that he had a fatal gunshot wound in the back of his head. Brown was killed the day after former police officer Derek Chauvin was convicted of charges for killing George Floyd.