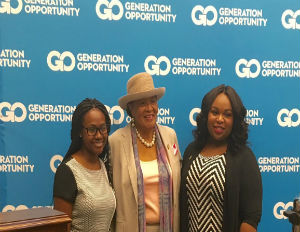 In its pilot year, the internship program was created to establish a pipeline of talented HBCU students from the “Tar Heel State” to Capitol Hill. A recent study found that African Americans make up less than 1% of top Senate staffers.

Because a lack of diversity isn’t confined to the Senate, Democratic Rep. Adams and Republican Rep. Walker (who is white) are taking action to increase staff diversity in the U.S. House of Representatives.

The Bipartisan HBCU Caucus Internship is the first of its kind. Two interns are participating this year: Vashti Hinton of North Carolina A&T State University and Quanetta King of Johnson C. Smith University. The interns will each spend four weeks in the Senate offices of a Democrat, and then four weeks in those of a Republican; totaling eight weeks.

BE: Why did you and Rep. Walker start the Bipartisan HBCU Caucus Internship Program?

Adams: We both want to get students more involved, so they can understand the workings of congressional offices. It was important to both of us that they get experience serving in the offices of Republican as well as Democratic senators.Â For young people interested in government and policy and want to be part of shaping that, this is an opportunity for them to learn how to put theory into practice.

The students in the program will receive a small stipend.

BE: What is the goal of the internship?

Adams:Â For students to learn as much as they can about Capitol Hill. They’ll get to attend committee meetings, briefings, and hearings; meet ‘the whip,’ meet with Rep. Nia Love, an African American Republican congresswoman, and meet lobbyists, advocates, and senior staff.

This program will also help us to develop a pool of candidates to recruit from. Ultimately, we’d like this program to help fill posts like research assistants and legislative directors.

BE: AreÂ students required to study a particular major?

They must also be a full-time junior or senior in good standing academically and socially. We don’t have a set GPA–but the university may set one.