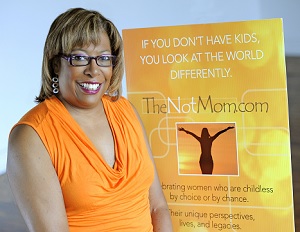 With the U.S. Census Bureau reporting that nearly half of all women between 15 and 44 are childless, it’s clear that the lifestyle for career women entering today’s workforce is quickly changing.

For some, not having children was a decision made at an early age, while for others, the decision to not have children was one that happened by chance and not by choice.

In the case of Karen Malone Wright, she identifies herself as a by-chance NotMom, where her expectation to have kids did not pan out the way she initially planned.

Previously working in public relations and communications for both the corporate and nonprofit sector, Wright is the CEO of ODYSSEY Creative Communications and the founder of TheNotMom.com. Creating the online platform in 2011, Wright says she started the blog as an effort to share her journey of being a working woman without children. Now, with four years of The NotMom movement under her belt, Wright is expanding the brand to create the first ever The NotMom Summit.

In an interview with BlackEnterprise.com, Wright opens up about the start of her blog, the ongoing conversation about successful career women without children, and the expectation for the first of its kind The NotMom Summit.

BlackEnterprise.com: What prompted you to start TheNotMom.com?
Wright: I started the website in 2011 on Tumblr and I did it mainly as a diary for myself, but it instantly began to resonate with other women. At the time, I was over 50 and I wasn’t an empty-nester. I didn’t have teenagers and I wasn’t sending kids off to college. So out of frustration, I started online what I wish I could have found for myself.

Later, in 2011, I entered the blog for an Ohio business development program for entrepreneurial women and won $5,000. Through research I learned that 1 in every 5 women do not have kids for various reasons, and that is basically around the world; not just in the U.S. So I spruced up the website a bit and moved it from Tumblr to WordPress and everything from there has been organic. The thing that distinguishes my website from others is that it’s for women who wanted to be a mom but it just didn’t happen, and it’s also for women who knew since they were little girls that they didn’t want to be a mom.

With more career women, especially millennial women, opting not to have kids or putting the idea of motherhood on hold, do you think there is still a certain level of judgement that comes with their decision?
I don’t believe that is a millennial thing necessarily. I mean [millennials] may be doing it in bigger numbers, but that ‘one in five women’ is around the world. Every country can trace the growth of women without children back to the 70s, which was when women were told they were going to college not to actually find a husband but to actually get an education. I think there will always be certain people who want to judge a person’s choice, but I think that we are in such a place now where you have TIME magazine and celebs talking about it. I’m personally childless by chance. I wanted to have kids but it just never happened, and there’s this misconception that women without children are sad for the rest of their life.