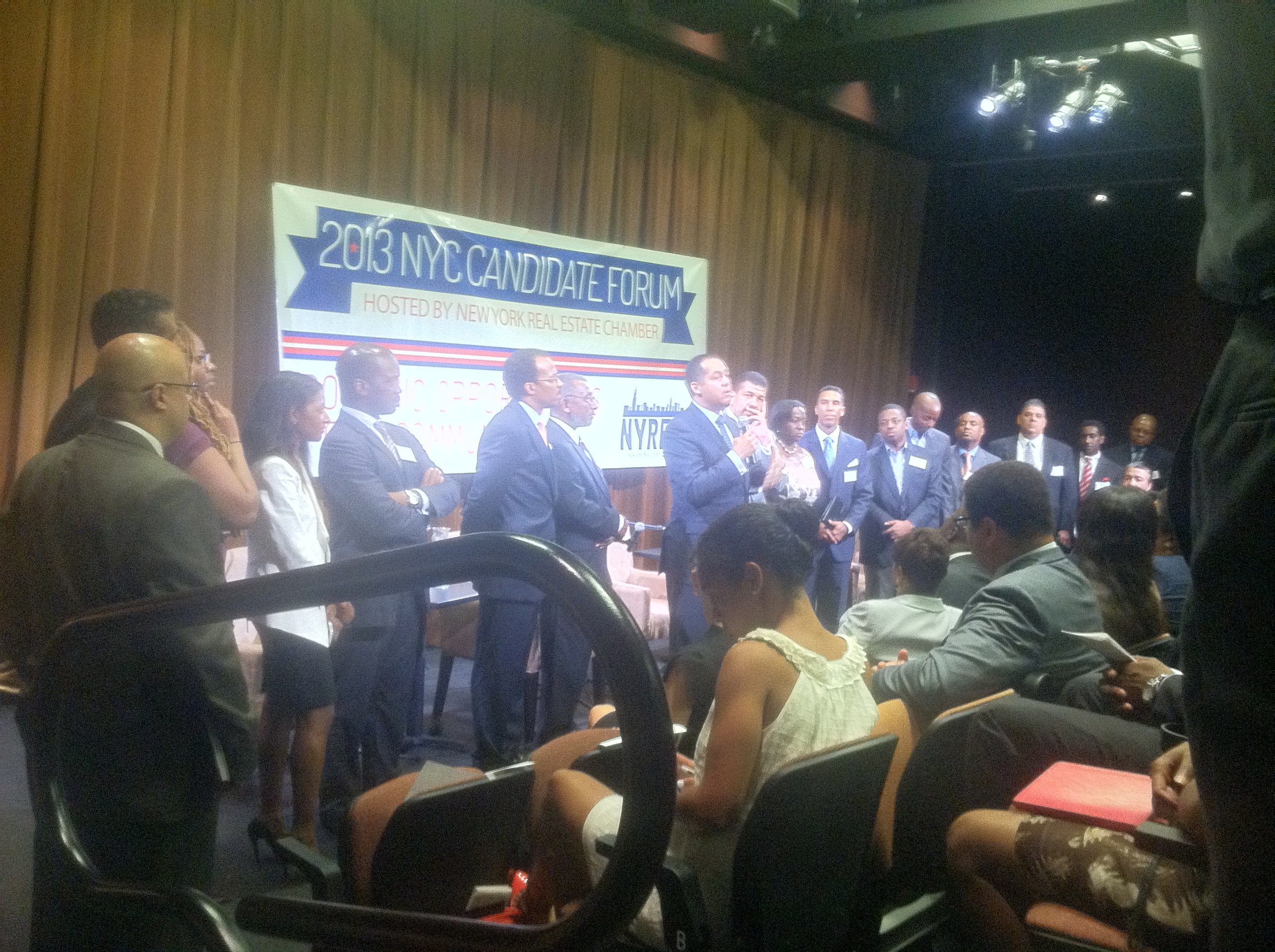 Four of New York City’s five Democratic mayoral contenders on Tuesday struck a conciliatory tone on a wide range of economic issues concerning the minority business community, including the management and fair dispersal of nearly $17 billion in procurement contracts, as well as access to better health care, living wages and jobs at a economic candidate’s forum in Harlem.

Made up of some of New York’s most powerful minority firms and entrepreneurs, the newly-formed New York Real Estate Chamber hosted the forum, an opportunity some board members said to assuage years of neglect resulting in an economic situation the candidate Bill de Blasio called “unsustainably unequal.â€

Tuesday morning’s forum was held just one day after a federal judge ruled that the NYPD’s “stop and friskâ€ policies unconstitutionally discriminated on the basis of race. Citing that the department had been “deliberately indifferentâ€ to its wrongdoing, U.S. District Judge Shira Scheindlin ordered a federal monitor preside over departmental reform related to its policing.

“Stop and friskâ€ has become a political flashpoint in the democratic campaign for mayor; with fervent and unwavering support from police commissioner Ray Kelly and Mayor Bloomberg (he said he will appeal the court’s decision). “Stop and Friskâ€ was lauded as a necessary crime-fighting measure which helped drop the rate of murder and other serious crimes to all-time lows.

“This New York is at a crossroads,â€ said Don Peebles, chief of the Peebles Corporation, one of the largest African American development companies in the country and a sponsor for the event. “It’s the first time in 12 years where we’re going to have all city-wide seats open, and half of the seats in the city council. So we get a chance to shape this new government and make sure that we step up to the responsibility, not run from it.â€

Bill Thompson, a former city comptroller who is African American and at turns incredulous and fiery, was the first to say he wants 20 percent of the services, goods and development to go to minority and women-owned businesses. He also stated that those doing business with the city (larger developments) should be required to hire with minority and women-owned businesses when they secure the contracts.

“The presumption is that [the city] is somehow giving up on quality or value,â€ when bringing minority contractors to the table, Weiner said when asked about city hall’s lack of inclusion. “We need to focus on how much investment can we keep here locally.â€

John Liu criticized Mayor Mike Bloomberg’s administration for not doing enough to ensure that minority- and women-owned businesses had a fair shot at landing city contracts. Liu, the current comptroller, which oversees allocation and accounting of funds, said as mayor he’d get rid of some of the rules that make it difficult for minority businesses to secure business from the city. “This administration does not take [minority and women-owned businesses] seriously,â€ he said. “They don’t go out there and try to truly create opportunities.â€

Calling the economic disparity “unsustainably unequal,â€ Bill de Blasio, who has spent a great deal of time campaigning in outer-borough communities echoed the 20 percent figure. “You have that commitment, that promise. You have my word on that.â€

De Blasio, the city’s public advocate, also arrived late, flanked by his wife, Chirlaine McCray, who is African American. He all but hinted his deputy mayor would be a person of color charged with the task of making sure that procurement for city contracts, and pushing for economic equality, was not simply a matter of politics, but also deeply personal. De Blasio’s resume includes a stint as an aide with Mayor David Dinkins, the last democratic mayor of the city. “It’s a matter of hiring people up and down the line who take the goal [of 20 percent] seriously, and take that goal seriously,â€ de Blasio said.

Liu and Thompson had to leave, allowing the late-arriving Weiner and de Blasio to spar over wage-disparity, among a few other topics. De Blasio said he supports an income tax increase on the wealthy making over $500,000 — from 3.9 percent to 4.3 percent — to help pay for pre-K and head start.

Moderator Cornell Belcher, a democratic pollster and political analyst for CNN asked the late-arriving Anthony Weiner what he thought of de Blasio’s plan.

Painting himself as an outsider, Weiner said he’d built his campaign on 125 ideas — he was the only candidate to allude to “stop and frisk,â€ saying that he advocated for cameras before the judges ruling.

Liu said New York’s Cost of living necessitates an $11.50-an-hour minimum wage. Liu, who was also on time but needed to leave for another commitment, alluded to his up-from-the-bootstraps story (His parents are immigrants from China*). Saying he was told he couldn’t win the race for city council and comptroller, he said he’s now being told that he can’t win for mayor. “I believe in giving everybody a fair shot.â€

Saying that government needs to take chances on unproven business, Liu also delivered the line of the day: “You need a track record to get business, but you need business to develop a track record.â€

But perhaps one of the more interesting story lines was the conspicuous absence of City Council Speaker Christine Quinn. Belcher, the moderator, more than once served up laughs at her expense: on the question of whether 20 percent of business would be going to minority – and women owned businesses, candidates wrestled with ideas about how to improve that number.

“Ms. Quinn, 50 percent?â€ he asked, gesturing toward her empty chair.

In parting, Belcher was only more unforgiving: “As always with Christine Quinn, she will show up if you vote for her,â€ he said.