In a closed call for members of the media, the White House highlighted ways in which President Obama’s economic policies have helped all African Americans but called out initiatives it’s pushing that will put more money in the pockets of single black mothers, particularly by passing the Raise the Wage Act.

[Related: Creating A Financial Plan You Can Stick To]

The Act, which would raise the minimum wage to $12 over the next 5 years, was introduced by Senator Patty Murray (D-Wash), and Rep. Robert C. “Bobbyâ€ Scott (D-Va) last April.

Jason Furman, chairman of the Council of Economic Advisers, citing a study by the Economic Policy Institute, (EPI), told reporters one of the Wage Act’s most significant impacts would be felt by African American mothers, 40% of whom EPI estimates would see bigger paychecks.

“One of the lessons of our recent economic experience is that when you work to strengthen the overall economy it does have widespread benefits to all groups, but that’s not enough.Â  It’s just not enough,â€ he adds. 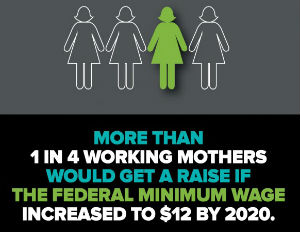 At the current minimum wage, a single mom who works full-time to support two children is left more than $4,500 below the poverty line. At $12 per hour in 2020, that full-time working mother of two would earn enough from her job to safely be out of poverty, the EPI report finds.

EPI data also found that Â the Raise the Wage Act would help close the gender wage gap. Not only would more women than men get a raise under the bill, but because women are especially concentrated in the very lowest-paying jobs (and are paid less, even within these jobs), they also would see the largest increases in their pay.