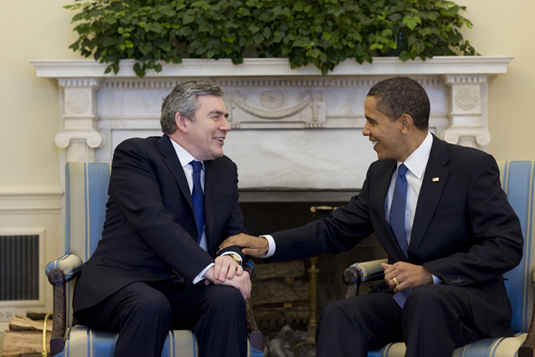 After their closed-door meeting, the two leaders held a mini press conference with reporters from both sides of the pond.

Covering topics that ranged from the revelation that Obama sent a letter to Russian President Dmitry Medvedev about new missile defense proposals, the sinking financial markets, the “special relationship” between the U.S. and Great Britain and the state of personal relations between the two leaders, among others.

The president started off the press conference by stating that now might be a good time to call your investment broker, now that the Dow Jones Industrial Average has hit a 12-year low. “Buying stocks is a potentially good deal,” if you’ve got a long-term perspective, said the president.

Obama dismissed the stock market’s day-to-day gyrations, comparing them to tracking polls in politics. If you pay too much attention to that, he said, “then you’ll probably get your long-term strategy wrong.”

Obama also took the time to criticize a report about his letter to Russia, saying the article “didn’t accurately characterize” his missive. He said that the message his letter conveyed “was simply a statement of fact that I’ve made previously.” He went out of his way to say that his concern for the security interests of Poland, the Czech Republic and other NATO allies is in no way diminished by outreach to Moscow. He also repeated earlier administration statements that he wants to reset the U.S.-Soviet relationship.

Obama also attempted to put to rest the question of whether U.S.-British ties had sunk to a mere partnership, instead of the close relationship the nations have shared in the past. Obama talked about the “special relationship” between the United Kingdom and the U.S., and its importance to Americans and to him personally. “My mother’s side of the family came from” the U.K., Obama said.

Brown returned the warmth by referring to the president by his first name, while Obama appeared to favor a more formal style of reference to Brown.

In a new Gallup Poll in anticipation of Brown’s White House visit, Americans said the U.K. was the nation’s “most valuable ally.” Two in three Americans chose one of the United States’ primary English-speaking allies — Great Britain or Canada — over Japan, Israel, and Germany. Great Britain has consistently ranked at or near the top of the country favorable list each time Gallup has measured Americans’ views of countries over the last decade.

Obama then responded to a question on the economy, with the president expressing confidence that “people are going to be put back to work” and things would get better. “Though it’s not going to happen overnight” and things are proceeding “by fits and starts…we are going to recover.”