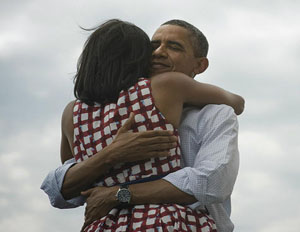 Last night the country waited in anticipation for either President Barack Obama or then-Republican presidential candidate Mitt Romney to be elected president of the United States, and social media outlets served as the sounding board for millions of Americans. But it should come as no surprise that with the simple and ubiquitous phrase “four more yearsâ€ accompanied by a touching photo of the 44th president and First Lady Michelle Obama embracing, President Obama’s Twitter account landed the most popular tweet of the night and in Twitter history.

The message was retweeted more than 350,000 times and favorited over 120,000 times, knocking a tweet from pop star Justin Beiber out of the top spot. Obama has changed the face of politics with his campaign’s keen use of social media since his 2008 campaign. He innovatively used Facebook, Twitter and YouTube to reach new demographics, especially young voters, to spread his message of hope and continued change for all Americans.

And Obama’s Twitter account wasn’t the only busy profile this election. We saw the good, the bad and the ugly with uplifting messages from HopeMob, tweeting “Congrats to @BarackObama for winning this election. Now, let’s all come together, conservative & liberal, to change the world for good!â€, and Â tweets from celebrity supporters like Chris Rock, who tweeted “No jokes I’m just happy my girls get to grow up in a better world than I did.â€ The social network wasn’t spared discourse from relentless opposers like Donald Trump, who tweeted: “He lost the popular vote by a lot and won the election. We should have a revolution in this country!â€

Overall more than 20 million tweets were sent out on Election Day, making it the most tweeted political event in history.