Obama Does His Part 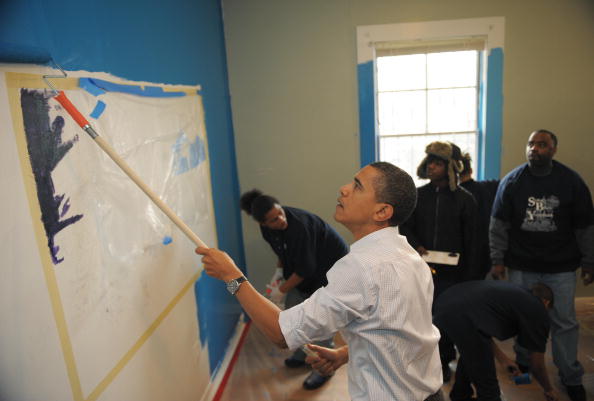 President-elect Barack Obama did his part.

And so did thousands of other Americans on today, the National Day of Service in honor of Dr. Martin Luther King Jr.

Accompanied by Martin Luther King III, Obama went to the Sasha Bruce Youthwork, a shelter for homeless, runaway, and troubled youth to help spruce up the place. Just one day before he will be sworn in as the 44th president of the U.S., Obama also went to Walter Reed Army Medical Center to visit wounded troops wounded in the wars in Iraq and Afghanistan.

The stately Sasha Bruce House on a hill was filled with volunteers, painting and preparing dormitories for girls and boys.

Obama slipped through the back door and was greeted by the house’s director and founder, Deborah Shore. Now wearing a casual Navy jacket and dark gray jeans, instead of the suit he wore to meet with the troops, Obama was greeted with shouts of “Mr. Obama!â€

He made his way through one room where volunteers were painting lockers for the kids, then made his way up to the boys’ dormitory. He looked at a mural. “I like that,â€ he commented, asking the names of volunteers and shaking hands.

He then stooped down to tie his shoes, shucked his jacket to reveal a checked shirt with rolled up sleeves, then went to work.

“Now, you want to make sure I do something simple, ‘cause I could screw something up,â€ he cautioned, saying he would not do electrical assignments.

First, he tried to take down a weathered blue valance, calling for a hammer or a screw driver. Instead, he steadied a ladder while another volunteer pried the balking valance loose. Obama was more successful with the next valance.

“Alright, that was pretty easy,â€ he offered.

He then quoted Dr. Martin Luther King: “Everybody can be great because everybody can serve.â€
Talking to the volunteers, he could be overheard saying, “Kids get to work. They learn how to work. Nothing more important than that.â€

Moving on to another wall, he picked up a roller of Yosemite Blue. “I knocked out my section.â€ He turned to the press and cautioned, “After all this painting, don’t be messing up.â€

He then joked, “This is good practice ‘cause I’m moving to a new house tomorrow.â€

Obama then said that together, “We can accomplish anything. One of the goals of my administration will be to make sure that we have a government that’s more responsive and more effective

Finding Inspiration in a New President