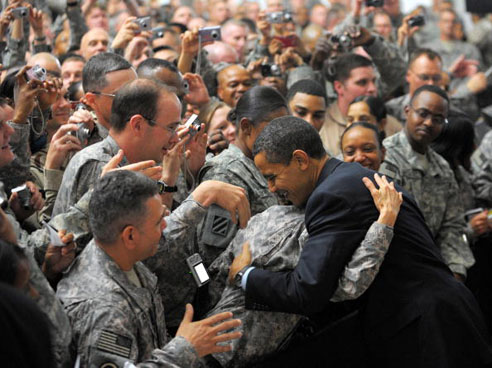 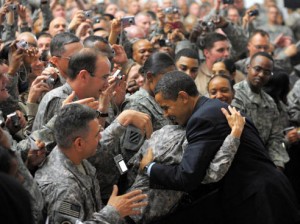 With the First Lady by his side, our nation’s Commander-In-Chief entered the Fort Bragg, North Carolina Army post to fulfill a promise he made as a candidate for the Oval Office some three years ago. Before hundreds of service members, many attired in fatigues and maroon berets of active duty, President Obama delivered a 34-minute speech that closed a significant chapter in modern military history:Â  The Iraq War.

He told a phalanx of young warriors on Wednesday: “We’re here to mark a historic moment in the life of our country and our military.Â  For nearly nine years, our nation has been at war in Iraq.Â  And you–the incredible men and women of Fort Bragg–have been there every step of the way, serving with honor, sacrificing greatly, from the first waves of the invasion to some of the last troops to come home.Â  So, as your Commander-in-Chief, and on behalf of a grateful nation, I’m proud to finally say these two words, and I know your families agree: Welcome home!â€

Those comments were greeted with thundering applause as he continued: “Dozens of bases with American names that housed thousands of American troops have been closed down or turned over to the Iraqis.Â  Thousands of tons of equipment have been packed up and shipped out… Over the last three years, nearly 150,000 U.S. troops have left Iraq… Those last American troops will move south on desert sands, and then they will cross the border out of Iraq with their heads held high… Iraq’s future will be in the hands of its people.â€

That primal cry signaled an end to years of combat that took an enormous human toll on thousands of young men and women. More than 1.5 million Americans have served in Iraq with roughly 30,000 of them wounded and nearly 4,500 Americans having made, as the president stated, “the ultimate sacrifice.â€

In Baghdad on Thursday, Defense Secretary Leon E. Panetta participated in a ceremony in which the colors of United States Forces-Iraq were formally retired, officially ending the Iraq War two weeks earlier than the terms specified by the security agreement signed by the U.S. and Iraqi governments stipulating that our troops must leave the country by Dec. 31.Â  The Obama Administration brought our fighting men and women home for the holiday.

These recent acts take place a decade after President Bush pressed for the invasion of Iraq after the 9/11 terrorist attacks based largely on false claims that slain dictator Sadam Hussein controlled WMDs. It has been almost seven-and-a-half years after President Bush landed on the USS Abraham Lincoln aircraft carrier in Navy One–a Lockheed S-3 Viking aircraft–on May 1, 2003 to declare that the military campaign know as “Operation Iraqi Freedomâ€ was successfully completed. With a huge “Mission Accomplishedâ€ banner in the background, he made his premature victory speech to a televised audience, and then turned the event into a photo op when he came out in a flight suit and posed with pilots and crew members. Controversy followed with mass military and civilian casualties due to increased guerilla attacks during the Iraqi insurgency. So much for “shock and awe.â€

The troop withdrawal proves to be another crowning achievement for the former Illinois state senator who nine years ago defined the move as “a rash warâ€ being conjured up by “weekend warriors in [the Bush Administration] to shove their own ideological agendas down our throats.â€ In fact, it was during his presidential campaign that both his Democratic and Republican opponents questioned Obama’s foreign policy and national defense credentials. But he has proven to be a masterful Commander-In-Chief gaining much higher marks in those areas from the American public than with the economy: According to a recent Wall Street Journal/NBC News poll, voters said that bringing the troops home was his second greatest accomplishment. Killing Al Qeada leader Osama bin Laden ranked No. 1.