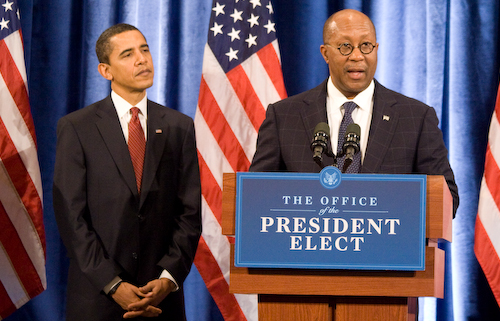 President-elect completed his senior cabinet appointments today, a full month before he is to be sworn into office as the 44th president of the U.S.

Together with previously announced appointees, the members will help craft Obama’s 21st Century Economic Recovery Plan, which has a goal of creating 2,500,000 new jobs and strengthening the economy.

Obama said he completed the selection of his economic team earlier than any other president-elect in history, “because we face challenges unlike any we have faced in generations.â€

“Daunting as the challenges we are inheriting may be, I’m convinced that our team and the American people are prepared to meet them,â€ he said Friday during his fifth press conference of the week. “It will take longer than any of us would like — years, and not months.Â  It will get worse before it gets better. But it will get better — if we’re willing to act boldly and swiftly.â€

Obama refused to say how much his planned economic stimulus proposal will cost, but it has been suggested that it might be as much as $850 billion over two years.

Still, Obama signaled that it could be huge because of his priorities: creating jobs, getting the economy back on track and fixing financial markets among them. “That is going to cost a significant amount of money on the front end,” he said, and then he emphasized what he called long-term benefits of acting and dangers of doing too little.

He vowed that whatever spending was required that it would be done responsibly, adding “We’re not intending to spend money lightly.”

Earlier in the day, Obama issued a statement praising President George W. Bush’s move to offer $17.4 billion in loans to ailing automakers in exchange for concessions from the industry and their workers.

“Today’s actions are a necessary step to help avoid a collapse in our auto industry that would have devastating consequences for our economy and our workers,â€ said Obama shortly after Bush’s announcement. “The auto companies must not squander this chance to reform bad management practices and begin the long-term restructuring that is absolutely required to save this critical industry and the millions of American jobs that depend on it.â€

Obama has yet to name his picks for senior intelligence positions; those announcements aren’t expected until he returns from his Christmas holiday in Hawaii.