Obama: 'Help Is on the Way'

Since being sworn in as the 44th president of the United States, Barack Obama has been bombarded by a series of challenges that no other chief executive of this nation has had to face with less than a month in office. He seeks to meet his major test — restoring an economy ravaged by an unmerciful recession, a severe credit crunch and rising unemployment — with the passage of his mammoth American Economic Recovery and Reinvestment Act. Through this economic recovery proposal, the president plans to create as many as four million jobs over the next few years through, among other measures, a mix of “shovel-readyâ€ infrastructure projects and long-term development of the sustainable energy industry. He also plans to jolt the economy by boosting consumer spending through a series of tax breaks and such measures as unemployment insurance relief.

What has stalled the Obama Administration’s ambitious program, however, has been recent political wrangling within the House and Senate over various provisions in the bill. For instance, the $819 billion House version, which did not receive a single Republican vote, focuses on spending for state education aid, health insurance for the unemployed and the repair of highways and bridges. In the $827 billion Senate version, Republican senators slashed spending provisions citing them as “wastefulâ€ while expanding tax breaks, including fixing the alternative minimum tax that impacts upper-income households and making car loan interest deductible. After the Senate votes on the measure — which has so far gained support from only three Republicans, just enough to get the 60 votes needed for passage — the legislation goes to conference committee for reconciliation of the House and Senate versions of the package. Both houses then vote on the measure again. 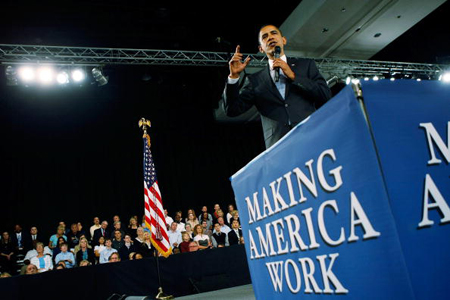 After making overtures to Republicans in a bid for bipartisanship, Obama has now gone on the offensive to get this critical measure passed. This week, he is taking his case to the American people through town halls in Elkhart, Indiana, and Fort Myers, Florida; his first presidential press conference; and an address to both houses of Congress.

In an exclusive one—on-one interview with Black Enterprise magazine Editor-In-Chief Derek T, Dingle, the president discussed the importance of swift passage of the recovery package, reviewed his expansive economic agenda, and detailed his administration’s plans to provide jobs, relief and entrepreneurial opportunities to millions of Americans — including our readership.

Black Enterprise: How would you characterize your first few weeks in office?

President Barack Obama: Obviously we have some enormous challenges but I’m very confident about the team that I’ve put in place. I think the economic recovery and reinvestment package that is working its way through Congress is one critical component of an overall recovery package. We’re also going to have to strengthen the banking system so that credit is going to businesses again. We’re also going to have to