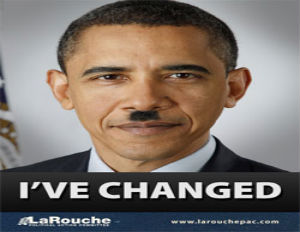 An 80-year-old Connecticut woman was charged with sixth-degree larceny today after she removed posters depicting President Obama as Hitler.

The Obama supporter saw the posters near a Hebron, Connecticut post office as she was driving in her car. She says she stopped to get a closer look and then she tore them down, even though someone tried to stop her. Ms. Lack eventually returned the posters but was still charged.