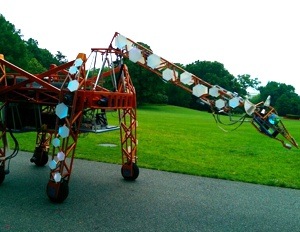 A passenger-ready robotic giraffe was one of the many incredible inventions shown by students around the country at the White House's first Maker Faire.

On Wednesday, the White House switched out of its business suit and into its lab coat as the building was transformed into a giant laboratory. The occasion was the first-ever Maker Faire held at the White House.

Maker Faire, a festival celebrating DIY culture and the spirit of inventors, was started by Make Magazine in 2006 in California. President Obama acknowledge the organization’s influence and dedication to the spirit of creativity among inventors.

In a proclamation, the president declared June 18 National Day of Making. “Through the generations, American inventors have lit our homes, propelled humanity into the skies, and helped people across the planet connect at the click of a button,” he wrote. “American manufacturers have never stopped chasing the next big breakthrough. As a country, we respond to challenge with discovery, determined to meet our great tests while seeking out new frontiers. During the National Day of Making, we celebrate and carry forward this proud tradition.”

There were over a dozen inventors at the faire, including Jane Chen, creator of the Embrace, a low-cost baby incubator, which received funding from BeyoncÃ© to the tune of $125,000.

There were printers of all kinds as well, ranging from plastic-based 3D ones to pancake printers that were able to replicate the president’s face through the medium of batter.

He addressed specifically, The Workshop School in West Philadelphia, where a group of students, thanks to their principal, Simon Hauger, were able to construct an efficient sports car. “With Simon’s help, we’ve got Derrick Bell here, Taliya Carter, Joshua Pigford. Their team built a biodiesel sports car that gets around a 100 miles per gallon,” said Obama. “Which is why the Secret Service didn’t let me drive it. ”

The goal? To encourage stateside innovation and manufacturing. “This event celebrates every maker — from students learning STEM skills to entrepreneurs launching new businesses to innovators powering the renaissance in American manufacturing. I am calling on people across the country to join us in sparking creativity and encouraging invention in their communities.”

The makers have arrived! Giving a final shine to a biodiesel car on the @WhiteHouse driveway. #NationOfMakers pic.twitter.com/VNnjh889zG

Tune in for the first-ever White House Maker Faire starting at 10am ET: http://t.co/xw80gvKQSL #NationOfMakers pic.twitter.com/8XfvX9OHLe