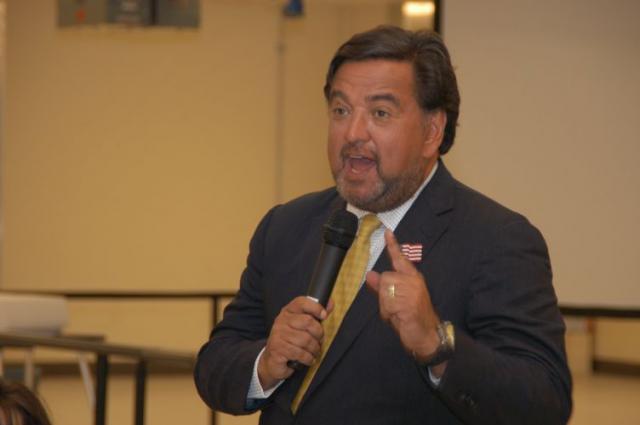 President-elect Barack Obama announced the nomination of New Mexico Gov. Bill Richardson as his commerce secretary at a Chicago news conference this morning.

Richardson, who had sought the Democratic presidential nomination this year, served as United Nations ambassador and energy secretary under former President Bill Clinton. After ending his bid for the White House, he broke from the Clintons to support Obama. Richardson is the first Latino to be named to the president-elect’s cabinet.

“After nearly two years traveling across this country, meeting with workers, visiting businesses large and small, I am more confident than ever before that we have everything we need to renew our economy — we have the ingenuity and technology, the skill, and commitment — we just need to put it to work,” said Obama. “It’s time to not just address our immediate economic threats, but to start laying the groundwork for long-term economic prosperity — to help American businesses grow and thrive at home, and expand our efforts to promote American enterprise around the world.

“This work is the core mission of the secretary of commerce. And with his breadth and depth of experience in public life, Governor Richardson is uniquely suited for this role as a leading economic diplomat for America.”

As commerce chief, Richardson will oversee the Minority Business Development Agency, the only federal agency specifically created to foster the growth and development of minority business. MBDA is also responsible for monitoring and working with all federal agencies to ensure a fair and open competition process for awarding government contracts that includes minority- and women-owned business goals.

“To this crucial work of restoring America’s international standing, Bill will bring a leadership style all his own,” Obama said at his press conference. “Bill has never been content to learn just from briefing books — never satisfied with only the official version of the story. During his time in Congress, he held more than 2,500 town-hall meetings, so he could hear directly from constituents. He was a regular in the U.N. cafeteria, mixing it up with U.N. employees over lunch. And during his 2002 campaign for governor, he actually broke a world record by shaking nearly 14,000 hands in just eight hours.”

Ralph Moore, president of Ralph G. Moore and Associates, a firm that helps minority and women-owned businesses become certified as federal contractors, applauds the choice and believes that Richardson will be an enthusiastic and effective advocate for minority business. He says, “When Richardson headed Energy, there were a number of minority contractors who did very well. He was a champion for 8(a) and other programs that benefited them and I think he’ll carry that same approach to Commerce. We can make this choice work for us.â€

C. Howie Hodges, who was an assistant director for the department’s Minority Business Development Agency during Clinton’s first administration, agrees. “Richardson had a very good strategic team and I have no

Protecting Your Business From Liability

FacebookTwitterYoutube
← Protecting Your Business From Liability ← The Cutting Edge: Lowering Your Healthcare Costs
×
'