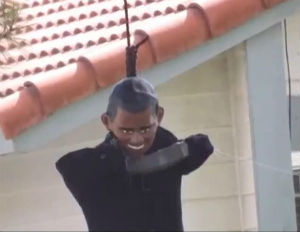 A Southern California man namedÂ Eddie MillionÂ arose the suspicion of the Secret Service when he put up a Halloween decoration of a lynched Obama.

The man claims he just wanted to put up something “spooky” for Halloween and thought a noose with Obama at the other end would do the trick.

The Secret Service told him his decoration “could have been construed as a threat to the president,â€ and that his “name is going to be on file. ”