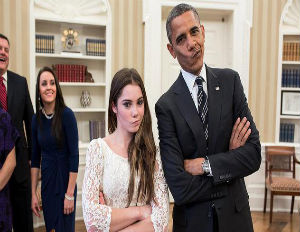 The White House posted the photo on Twitter this past Thursday after the Women’s Olympic Gymnastics team visited the White House.

Maroney, unintentionally created an internet photo meme, after she scrunched up her mouth and nose in irritation on the medals podium for coming in second place in the vault competition at this past summer’s Olympic games.

“He was the one who brought it up,” Maroney told the Associated Press about how the photo was taken. “We were about to leave and he said, ‘I want to talk to you one second about the face.’ He said, ‘I pretty much do that face at least once a day.'”

“I, like, freaked out,” Maroney said. “He said, ‘Let’s do it together.’ We took a picture and now it’s everywhere.”