Obama on the Record: Anniversary of D-Day 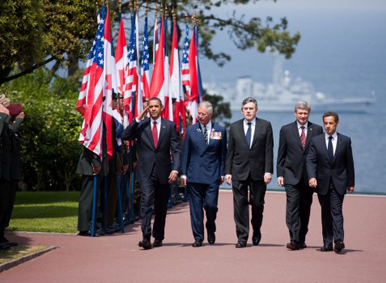 President Barack Obama (L-R), Britain's Prince Charles, Britain's Prime Minister Gordon Brown, Canada's Prime Minister Stephen Harper and France's President Nicolas Sarkozy arrive at the Colleville-sur-Mer cemetery to attend a ceremony marking the 65th anniversary of D-Day. (Source: White House)
THE PRESIDENT: Good afternoon. Thank you, President Sarkozy, Prime Minister Brown, Prime Minister Harper, and Prince Charles for being here today. Thank you to our Secretary of Veterans Affairs, General Eric Shinseki, for making the trip out here to join us. Thanks also to Susan Eisenhower, whose grandfather began this mission 65 years ago with a simple charge: “Ok, let’s go.” And to a World War II veteran who returned home from this war to serve a proud and distinguished career as a United States Senator and a national leader: Bob Dole. (Applause.)

I’m not the first American President to come and mark this anniversary, and I likely will not be the last. This is an event that has long brought to this coast both heads of state and grateful citizens; veterans and their loved ones; the liberated and their liberators. It’s been written about and spoken of and depicted in countless books and films and speeches. And long after our time on this Earth has passed, one word will still bring forth the pride and awe of men and women who will never meet the heroes who sit before us: D-Day.

Why is this? Of all the battles in all the wars across the span of human history, why does this day hold such a revered place in our memory? What is it about the struggle that took place on the sands a few short steps from here that brings us back to remember year after year after year?

Part of it, I think, is the size of the odds that weighed against success. For three centuries, no invader had ever been able to cross the English Channel into Normandy. And it had never been more difficult than in 1944.

That was the year that Hitler ordered his top field marshal to fortify the Atlantic Wall against a seaborne invasion. From the tip of Norway to southern France, the Nazis lined steep cliffs with machine guns and artillery. Low-lying areas were flooded to block passage. Sharpened poles awaited paratroopers. Mines were laid on the beaches and beneath the water. And by the time of the invasion, half a million Germans waited for the Allies along the coast between Holland and northern France.

At dawn on June 6th, the Allies came. The best chance for victory had been for the British Royal Air Corps to take out the guns on the cliffs while airborne divisions parachuted behind enemy lines. But all did not go according to plan. Paratroopers landed miles from their mark, while the fog and clouds prevented Allied planes from destroying the guns on the cliffs. So when the ships landed here at Omaha, an unimaginable hell rained down on the men inside. Many never made it out of the boats.

And yet, despite all of this, one by one, the Allied forces made their way to shore — here, and at Utah and Juno; Gold and Sword. They were American, British, and Canadian. Soon, the paratroopers found each other and fought their way back. The Rangers scaled the cliffs. And by the end of the day, against all odds, the ground on which we stand was free once more.