Obama on Trump's Mexican Border Wall: "Good Luck With That." 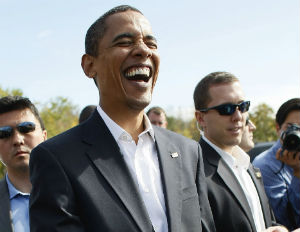 During a daily White House briefing on Tuesday, President Obama discussed what he called the “half-baked” policy of Republican presidential candidate, Donald Trump.

President Obama told reporters he’s been “getting questions from foreign leaders constantly about some of the wackier suggestions that have been made.â€

In a two-page memo published by the Washington Post, Trump finally provided some insight into how he plans to get the Mexican government to pay for his proposed wall.

According the memo, Trump plans to cut off remittances between the U.S. and Mexico. In other words, Trump would block people in the U.S. from transferring cash to Mexico and, vice versa. Trump would also cancel the legally-obtained visas of Mexicans in the U.S. Trump reasons that these threats are enough to force the Mexican government to hand over $5 – $10 billion.Â

“The notion that we’re going to track every Western Union bit of money that’s being sent to Mexico – good luck with that,” Obama said.

“People expect the president of the United States and the elected officials in this country to treat these problems seriously, to put forward policies that have been examined, analyzed, are effective, where unintended consequences are taken into account. They don’t expect half-baked notions coming out of the White House. We can’t afford that.”