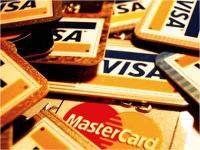 Making good on a campaign trail promise, President Barack Obama met with top executives from 14 credit card companies today at the White House and urged them to adopt more consumer friendly practices and put an end to “any time, any reason rate hikes and late fee traps.â€ He also called for more accountability and transparency in documents that describe credit card terms and conditions.

“No more fine print, no more confusing terms and conditions,â€ he said. “We want clarity and transparency from here on out.â€

That legislation would impose limits on raising card fees and rates and require broader disclosure of information to consumers. In addition, it would restrict companies from computing interest charges on balances from more than one billing cycle and require a 45-day notice of any rate hikes. Lawmakers have agreed to include some administration amendments in the bill when it goes to the floor for a full vote next Thursday.

The president has indicated that he would like to see added to the legislation additional protections that ban unfair rate increases and forbids abusive fees and penalties; provides forms and statements written in plain language; easily accessible contract terms that will enable consumers to go online and comparison shop for credit card offers; and enhanced monitoring, enforcement, and penalties for companies that violate the law.

Obama said that because credit cards are an important source of unsecured debt for both individuals and small businesses, it is important to preserve that market. The Federal Reserve estimates that close to 80% of US families have credit cards.

“But we also want to do so in a way that eliminates some of the abuses and some of the problems that a lot of people are familiar with,â€ said Obama, such as doubled interest rates and fees consumers were unaware of being suddenly tacked on to their bills. He also expressed confidence that lawmakers and credit card issuers can reach a “commonsensicalâ€ agreement that will enable the industry to operate in a way that’s not dependent upon bubbles or consumers over-extending themselves.

Late last year, the Federal Reserve adopted sweeping new rules that aim to protect consumers from arbitrary hikes in interest rates or inadequate time provided to pay their bills slated to go into effect in 2010. But the president and lawmakers on Capitol Hill appear to want to go further.

In a statement issued by the American Bankers Association, President and CEO Edward Yingling, said that credit card companies are working hard to implement new federal regulations, “although the Federal Reserve itself has indicated these rules are likely to shrink credit availability and result in increased rates for some consumers.â€ Any additional efforts, Yingling said, should balance the need to enhance consumer protections with ensuring that credit continues to be affordable.