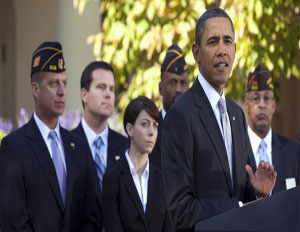 With the unemployment rate for Iraq and Afghanistan veterans in the double digits, President Obama urged Congress on Monday to pass a component of his jobs package aimed at helping veterans find work.

“There’s no good reason to oppose this bill, not one. Our veterans did their jobs. It’s time for Congress to do theirs,â€ said Obama, flanked by soldiers, in the White House Rose Garden Monday. “It’s time for them to put country before party, put our veterans back to work, and pass this element of the jobs package that benefits our veterans and gives businesses an incentive to hire veterans.â€

The White House also announced a series of other initiatives that would create an online jobs bank for veterans and provide six months of personalized case management and employment counseling for unemployed veterans.

“We can’t simply wait for Congress to do its job,â€ Obama said. “If Congress won’t act, I will.â€

The U.S. Senate may consider the veterans proposal this week. But will it fare any better than the others?