Barack Obama on Mitt Romney: Americans are not 'Victims' 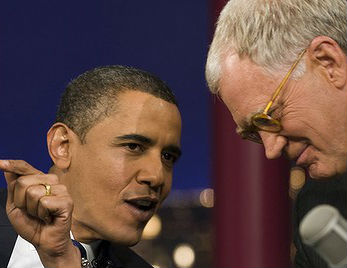 President Barack Obama responded to Mitt Romney‘s controversial comments, in which he characterized Obama supporters as feeling entitled to government dependency. Obama said that Americans are not “victims” and anyone in pursuit of the presidency should be working for “everyone, not just for some.”

Romney recently got into hot water after a secret video of him speaking to a group of donors surfaced on the Internet. In the video, Romney is seen and heard ridiculing Obama voters as feeling entitled to health care, housing and food, stating that he is not worrying about those voters but rather on independent voters. Romney also said that those voters, who make up 47 percent of the population, do not pay income taxes.

Obama’s response to Romney’s comments were taped on the Late Show with David Letterman.

“My expectation is that if you want to be president, you have to work for everyone, not just for some,” the president said. “There are not a lot of people out there who think they are victims” or entitled, he said.